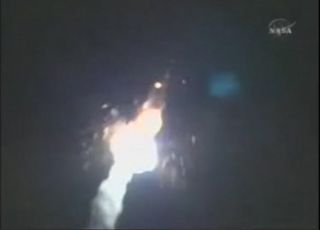 The ATK-ALV X-1 rocket explodes after launch controllers issued a self-destruct command when the booster veered off course during an Aug. 22, 2008 launch from NASA's Wallops Flight Facility.
(Image: © NASA TV.)

NASAofficials said no injuries or property damage were immediately reported followingthe launch failure. While most of the debris from the rocket is thought tohave fallen into the Atlantic Ocean, NASA said it had received conflictingreports of debris being sighted on land.

"NASAis very disappointed in this failure but has directed its focus on protectingpublic safety and conducting a comprehensive investigation to identify the rootcause," NASA said in a press release. "NASA is assembling amultidiscipline team, along with the rocket's maker Alliant TechSystems, or ATK, of Salt Lake City, to begin the investigationpromptly."

The launchoccurred at 5:10 a.m. EDT (0810 GMT) after an extremely smooth countdown,mission managers said.

Kent Rominger,vice president for advanced programs at ATK Space Systems, told reporters theexperimental rocket lifted off as expected but veered off course, promptingrange officials to trigger the vehicle command destruct safety mechanism 27seconds into the flight. Rominger said the rocket had reached an altitude ofapproximately 11,000 feet to 12,000 feet (3,300 meters to 3,600 meters) by thetime it was destroyed.

The launchmarked the first and only flight of the ALV-X1, a rocket ATK built and paid forto test various proprietary technologies Rominger declined to identify. NASA'sHypersonic Boundary Layer Transition (HYBOLT) and the Sub-Orbital AerodynamicRe-entry Experiment (SOAREX) payloads were on board the nearly 55-foot (17-meter)tall rocket.

The HYBOLTexperiment, developed by NASA’s Langley Research Center in Virginia, wasaimed at studying the effects of airflow and heating on hypersonic vehiclesdesigned to fly at velocities faster than eight times the speed of sound.

NASA’sAmes Research Center in California designed the SOAREX experiment, whichconsisted of three separate probes that were expected to be released afterHYBOLT was jettisoned, then plummet back toward Earth to evaluate newtechniques for spacecraft reentry.

One of thethree probes belonged to the U.S. Naval Research Laboratory and carried prototypereceiver and transmitter for use in tracking objects in ocean recovery, NASAofficials said. There are currently no launch-worthy spares for theexperiments, they added.

JuanAlonzo, director of NASA's fundamental aeronautics program, said the agency hadspent about $17 million on this mission, including $11 million for the twopayloads and the remaining $6 million for system integration, range fees andother expenses.

“We knewthe risks of launching payloads on a first of a kind rocket and we acknowledgedthose from the beginning of the development of these payloads,” Alonzosaid.

NASA iswarning that the debris could be hazardous and that anybody who thinks they mayhave encountered rocket debris is advised not to touch it and to call theWallops Emergency Operations center at 757-824-1300.