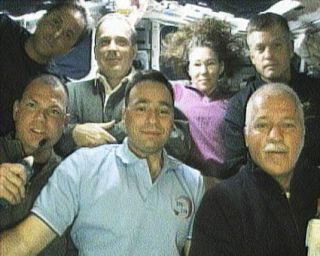 Surrounded by his fellow STS-119 crew members, Discovery pilot Tony Antonelli answers a question from a student at Punahou School in Honolulu on March 27, 2009 during the STS-119 mission.
(Image: © NASA TV)

NASA has clearedthe space shuttle Discovery and its crew of seven astronauts for their planned Saturdaylanding after giving the spacecraft a clean bill of health today.

Missionmanagers declared Discovery fit for landing after a detailed analysis of datafrom a final heat shield check performed by the astronauts on Thursday.

?That isgreat news,? Discoveryskipper Lee Archambault radioed Mission Control after hearing the news. ?Weappreciate you passing that along.?

Archambaultand his crew are due to land on a runway at NASA?s Kennedy Space Center inFlorida at 1:39 p.m. EDT (1739 GMT) to end a 13-day flight that delivered the lastpair of solar arrays to the International Space Station.

The newsolar wings completed the station?s power grid and are expected to help theoutpost support larger crews that can, in turn, perform more scientificresearch. During the flight, Discovery?s crew delivered a vital part for thespace station?s new system to recycle astronaut urine, sweat and cabincondensation into drinking water in order to support larger crews.

The shuttleis also ferrying NASAastronaut Sandra Magnus back to Earth after a 4 1/2-month stay at thestation. Her replacement, Japanese astronaut Koichi Wakata, launched to thestation aboard Discovery on March 15 and will stay aboard the outpost for threemonths. Magnus will use a special recumbent seat that will allow her to sit ina reclined position during the descent to ease her return to gravity.

On Friday,Archambault and shuttle pilot Dominic ?Tony? Antonelli checked Discovery?s flightcontrol systems and thrusters to prime the spacecraft for its return to Earth.They planned to practice landing Discovery on a computer-based simulator latertoday.

Discovery astronauts told the students they were proud to have helped the space station reachfull power. They also advised any students interested in becoming astronauts tostudy hard in math and science, but also keep their sense of wonder. ?

?You haveto like exploration and discovery,? mission specialist John Phillips said. ?Ifthose are your passion, then this could be a good job for you.?

Shuttleentry flight director Richard Jones said the weather outlook at Discovery?sCape Canaveral, Fla., landing strip is very favorable. NASA prefers to land itsshuttles at the Florida spaceport to avoid the extra time and cost of ferryingorbiters from a backup runway in California.

Jones saidscientists are also interested in a specific heat-resistant tile, one of thethousands lining the Discovery?s underbelly, which has been intentionally flawedaspart of an experiment.

Made of anew type of material called BRI-18, the tile has a slight protuberance to serveas a ?speed bump? during Discovery?s re-entry that will interrupt the otherwisesmooth hypersonic flow of superheated air around it. The bump does not pose asafety risk to the shuttle or its crew, mission managers said.

The bump islocated near the rear of Discovery?s left wing and is about 4 inches (10 cm) longand just over a quarter-inch (0.76 cm) wide. A series of temperature sensorswill record the extra heating aft of the bump to study the hypersonic air flowand tile for to aid the heat shield design of NASA?s space shuttle successor,the Orion Crew Exploration Vehicle.

A Navychase plane will observe Discovery?s re-entry from below the spacecraft using along-range infrared camera as the shuttle flies over the Caribbean at about Mach15, Jones said.

?There?s alot of people that are interested in seeing that data,? Jones said.