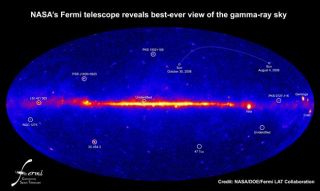 This view from NASA's Fermi Gamma-ray Space Telescope is the deepest and best-resolved portrait of the gamma-ray sky to date. The image shows how the sky appears at energies more than 150 million times greater than that of visible light. Among the signatures of bright pulsars and active galaxies is something familiar -- a faint path traced by the sun.
(Image: © NASA/DOE/Fermi LAT Collaboration)

Astronomersnow have their best-ever view of the most extreme energy in the cosmos with anew map combining three month's worth of data, a team of scientists said today.

The map isbased on data collected by NASA's Fermi Gamma-ray Space Telescope, which hasscopes and cameras that peer out into the universe ? from within our solarsystem to galaxies billionsof light-years away ? in search of the sources of the highest energyradiation, called gamma rays.

Gamma rayssit on the far left of the electromagnetic, or light, spectrum, with shorterwavelengths and higher energy than ultraviolet light and even X-rays.

The all-skyimage produced by the Fermi team shows us how the cosmos would look if our eyescould detect radiation 150 million times more energetic than visible light. Theview merges observations from Fermi's LargeArea Telescope (LAT) spanning 87 days, from August 4, 2008, to October 30,2008.

"Fermihas given us a deeper and better-resolved view of the gamma-ray sky than anyprevious space mission," said Peter Michelson, the lead scientist for theLAT at Stanford University. "We're watching flares from supermassive blackholes in distant galaxies and seeing pulsars, high-mass binary systems, andeven a globular cluster in our own."

The mapincludes one object familiar to everyone: the sun. "Because the sunappears to move against the background sky, it produces a faint arc across theupper right of the map," Michelson explained.

From themap, the Fermi team created a "top 10" list of five sources withinthe Milky Way and five beyond our galaxy.

The topsources within our galaxy include the sun; a star system known as LSI +61 303,which pairs a massive normal star with a super-dense neutron star; PSRJ1836+5925, which is one of many new pulsars, a type of spinning neutron starthat emits gamma-ray beams; and the globular cluster 47Tucanae, a sphere of ancient stars 15,000 light-years away.

The Fermitop 10 also includes two sources ? one within the Milky Way plane and onebeyond it ? that researchers have yet to identify.

A paperdescribing the 205 brightest sources the LAT sees has been submitted to TheAstrophysical Journal Supplement.