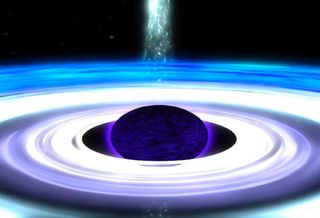 An artist's concept of a black hole, surrounded by an accretion disk. The gas in this disk is heated to millions of degrees Celsius and emits X-ray radiation.
(Image: © Nasa/Honeywell Max-O digital group/Dana Berry.)

When blackholes are perturbed, they vibrate somewhat like a ringing bell. Now astronomershave narrowed down the rotational speed at which that vibration should stop.

As istypical, they did it out by running a simulation. But instead of asupercomputer, they used a batch of Sony Playstation 3 gaming consoles wiredtogether.

The so-calledPS3 Gravity Grid, a network of 16 Playstation 3 consoles grouped togetherin a cluster capable of running simulations that rival a dedicatedsupercomputer at a much lower cost.

?You canget a supercomputer?scapability with relatively little money,? said Lior Burko of the Universityof Alabama, Huntsville, who led the black hole study, in an interview.

Rather thanrenting computer time on a supercomputer that could cost $5,000 per simulation,Burko and his colleagues used the PS3 Gravity Grid built by Gaurav Khanna, aphysics professor at the University of Massachusetts, Dartmouth.

The clustercan be built for around $6,000, and allows simulations to be repeated at noextra cost. The system is tailored to simulations that require massive amountsof computations, but relatively little RAM memory.

Burko andKhanna used the PS3 Gravity Grid to run simulations that resolved an ongoingdispute over the speed at which spinning black holes stop vibrating justafter forming or being perturbed by an outside object. One theory held thatthe black holes go silent at relatively fast speeds, while another theorycontended they went quiet at slower speeds.

Accordingto the new simulations, the gravity wave vibrations from aspinning black hole that?s been perturbed would settle out according to thefaster of the two theories, though the actual speed will vary, Burko said.

?It dependson the mass of the black hole,? he added. ?Let?s say you?re in a spaceshiporbiting the black hole and the black hole is perturbed. Then you need to waita shorter time for the vibrations to settle to a certain amplitude.?

Thephenomena, Burko said, can be compared to a ringing bell.

Gravitationalwaves are predicted by Einstein's theory of general relativity to emanatefrom neutron stars and black holes, but astronomers have not yet detected anydirectly.

Theresearch is detailed in the Jan. 7 issue of the science journal Classicaland Quantum Gravity.

While thePS3 Gravity Grid may not be useful for all types of research, for thoserequiring little RAM but massive computations it can prove a cost-cutting tool,said Khanna, who built a smaller cluster before stringing together the16-machine grid.

"Sciencebudgets have been significantly dropping over the last decade," saidKhanna, who describes how to build a PS3 computer cluster on his Web site."Here's a way that people can do science projects less expensively."