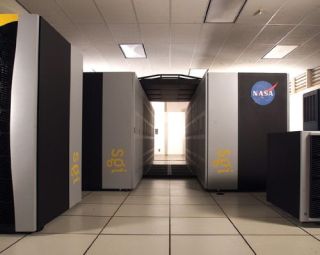 NASA researchers have teamed up with a pair of Silicon Valley firms to build a supercomputer that ranks alongside the world's largest Linux-based systems.

"Our space scientists in the past were starved for [computer] cycles," said Walter Brooks, chief of the NASA Advanced Supercomputing (NAS) division. "Sometimes people would submit an idea and it would take weeks to get an answer."

Brooks told SPACE.com the new system will allow scientists to run complicated computer models, such as those used for research into planetary formation or solar physics, alongside the meticulous space shuttle engineering studies critical for NASA's return to flight.

NASA's Ames Research Center in Mountain View, California -- home to NAS -- is developing the new supercomputing system as part of its collaborative Project Columbia with the aid of Silicon Graphics, Inc. (SGI) and the Intel Corp. in the Silicon Valley.

Plans call for a network of 20 powerful SGI Altix computers, each with 512-processor systems, equipped with 500 terabytes of local data storage. Once the computers are linked, their 10,240 Intel Itanium 2 processors will power the Space Exploration Simulator over a wide range of studies, including space shuttle modeling, climate change, mission safety and aeronautics.

"This will enable NASA to meet its immediate mission-critical requirements for return to flight, while building a strong foundation for our space exploration vision and future missions," NASA Administrator Sean O'Keefe said in a statement.

During the Columbia investigation, engineering and shuttle computer models took up most of NASA's supercomputing capacity, leaving Earth and space science studies by the wayside. With the new system, a single computer node can handle the return to flight shuttle modeling requirements, opening the rest for scientific research. The space agency also plans to allow the public science and engineering communities access to a portion of the Space Exploration Simulator for their own studies.

Ames and SGI researchers already had one 512-processor Linux computer -- built last year -- named Kalpana in honor of astronaut Kalpana Chawla who died with her fellow crewmates in the Columbia accident. A second machine has been linked to it, with the remaining 18 expected to follow over the next three months.

Since the Space Exploration Simulator relies on off-the-shelf technology, researchers can upgrade the system as more advanced computer chips and processors become available. Those internal upgrades are key, since the 20-computer system has consumed the available space at Ames.

"NASA, 20 years ago, led the way in computing," Brooks said. "When you're building the world's most complex vehicle, tackling hard problems like debris and crew escape...we need that kind of computing ability."