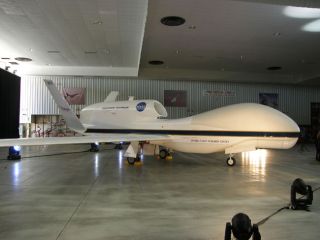 In partnership with Northrop Grumman and NOAA, NASA's Dryden Flight Research Center located at Edwards Air Force Base in California formally unveiled the first of their Global Hawks in a Thursday ceremony.

The fully autonomous aircraft can carry a 2,000-pound (907-kg) science payload at 65,000 feet (19,812 meters) on a flight lasting over 30 hours without refueling. Two pre-production RQ-4s, the first and sixth built (designated AV-1 and AV-6) were transferred to NASA in the fall of 2007, and AV-6 is undergoing final preparations to begin its scientific career in about 10 weeks.

Under the five-year Space Act Agreement, NASA and NG will jointly operate the aircraft. A number of NASA facilities will be involved, with Dryden operating the aircraft and Ames Research Center providing technical support and equipment. Goddard Space Flight Center scientists helped define mission objectives as well as built some of the sensors the aircraft will carry, and the Marshall Space Flight Center will provide real-time mission monitoring and communications with the science payloads.

NOAA is also involved as a partner, and has a strong interest in using the Global Hawk for the study of hurricanes, flying the UAV into storms that are too dangerous for manned aircraft. NOAA Project Scientist Dr. David Fahey described the use of the RQ-4 to study hurricanes as 'the big prize," although he indicated that scientific use of the aircraft is primarily being limited at this point by funding, as the technology is so new. "Financially, there's a struggle to do what we want to do, when we want to do it with this program. There isn't somebody throwing money at it. Its progress is being measured, or limited, by the available funding," said Fahey.

After several initial aircraft and equipment checkout flights which will take place in the Edwards area, AV-6's first science program, Global Hawk Pacific 2009, or GloPac, will get under way this spring. For the six-flight program, twelve one-of-a-kind atmospheric science sensors will be mounted on the RQ-4 in place of its previous military surveillance payload and flown over the Pacific and Arctic oceans.

According to NASA, GloPac will use the aircraft to validate instruments onboard NASA's Aura Earth Observing System satellite, as well as to explore "trace gases, aerosols and dynamics of remote upper troposphere/lower stratosphere regions." On another of the GloPac flights, the Global Hawk will be flown  from  the North Pole down to the equator and back twice in order to obtain atmosphere samples from vastly distant areas all on the same day, a task only made possible by the aircraft's long endurance.