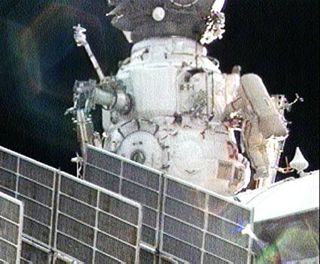 Clad inRussian-built spacesuits, stationcommander Michael Fincke of NASA and flight engineer Yury Lonchakov spentmore than five hours working outside the orbiting laboratory to attach the newscience equipment. The only hitch popped up late in the spacewalk, when aproblematic data relay for a joint Russian-European experiment thwartedrepeated attempts to install it.

?Okay,going out into space again,? said Fincke, who made his fifth career spacewalkin the excursion. ?Excellent! It?s good to be here again.?

Lonchakov,a cosmonaut with Russia?s Federal Space Agency, led the five-hour, 38-minutespacewalk with Fincke while their NASA crewmate Sandra Magnus monitored theirprogress from inside the space station. The spacewalk began at 7:51 p.m. EST(0051 Dec. 23 GMT), about 40 minutes late, due to a pressure valve glitch.

Thespacewalkers swiftly accomplished their primary task to install a so-calledLangmuir probe near their airlock hatch of the space station?s Russian-builtPirs docking compartment. The tool is designed to measure the surrounding plasma and electromagneticenvironment.

Data fromthe probe is expected to help Russian engineers pin down the cause of explosivebolt malfunctions that sent two of the last three Soyuz spacecraft thatferried station astronauts back to Earth to suffer module separation glitchesduring their descents. The malfunctions, in October2007 and April 2008, forced the Soyuz vehicles into off-target landings andsubjected their crews to higher gravitational stresses than nominal landings.

Russianengineers believe that electrical arcs or other electromagnetic interferencenear the space station?s Soyuz docking ports may have prompted the explosivebolt failures. A suspect bolt was removed from the last Soyuz to land prior toits Oct. 24 descent this year and it touched down on target as planned.

But Russianengineers hope the new plasma probe outside the station will yield moreinsights.

?It?sdefinitely a step in that process,? said Kirk Shireman, NASA?s deputy spacestation program manager. ?There?s still a ways to go in the overallunderstanding and confirmation of the root cause that we have on the Soyuz.?

In additionto attaching the plasma probe, Lonchakov and Fincke retrieved a Russianexperiment canister of biological samples from the space station?s hull. Theyalso installed a Russian plasma physics experiment called Impuls to theexterior of the station?sZvezda service module, at times working uncomfortably closed to a solararray, which they asked flight controllers to move to give them more room.

But it wasa second experiment, dubbed EXPOSE-R, which refused to activate properly afterthe spacewalkers installed it near Impuls. A joint project between the Europeanand Russian space agencies, the experiment is designed to understand howorganic materials are affected when exposed directly to space.

Despite repeatedefforts to activate it, flight controllers at Russia?s Mission Control nearMoscow were unable to receive any telemetry from the device via a data relayconnector. Flight controllers eventually ordered Fincke and Lonchakov to removethe experiment and return it back inside the International Space Station.

?We had toremove the entire EXPOSE-R because of one connector,? said a disappointedLonchakov. ?Yes, that?s a shame.?

Mondaynight?s spacewalk marked the 19th excursion outside the space station this yearand the 119th dedicated to construction and maintenance of the orbitinglaboratory since its first element launched in 1998. Fincke ended his fifthspacewalk with 21 hours and 23 minutes of spacewalking time. Lonchakov,meanwhile, ended with five hours and 38 minutes in his spacewalking debut.

?Yes it wasbeautiful, although we really had no time to look around,? Lonchakov replied.