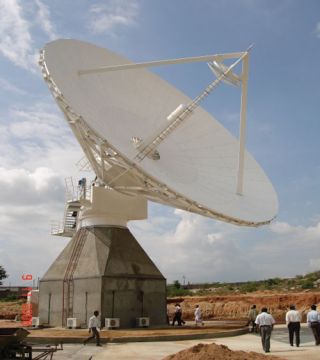 BANGALORE,India ? With India's Chandrayaan-1 lunar probe settled into a stable orbit 100kilometers over the Moon?s poles, eight of the 10 scientific instruments onboard the spacecraft have been powered on and tested at least once, a seniorofficial of the Indian Space Research Organisation (ISRO) told Space News Nov.20.

The $86million Chandrayaan-1mission was launched Oct. 22 by ISRO's Polar Satellite Launch Vehicle fromSatish Dhawan Space Centre in Sriharikota on the southern coast of India. It enteredlunar orbit Nov. 8 and is expected to study the Moon for two years.

S.K.Shivakumar, director of ISRO's telemetry tracking and command network, saidNov. 20 that the spacecraft and the eight instruments activated to date werefunctioning normally.

Of the tworemaining instruments, a high-energy X-ray spectrometer built by India was slated for activation within a matter of days, Shivakumar said, while aSwedish-built imager would not be turned on until Dec. 5 per the request of theinstrument's principal investigator.

Shivakumarsaid the latest instrument powered on as Chandrayaan-1's flight controllerswere heading into the weekend was an X-ray spectrometer developed by RutherfordAppleton Laboratory in the United Kingdom. "We tested it for some time and itis functioning normally," Shivakumar said. The instrument will use an X-rayfluorescence spectrometry technique to measure the Moon's elementalcomposition.

Shivakumarsaid that both of the orbiter's U.S.payloads ? the Miniature Synthetic Aperture Radar and Moon MineralogyMapper ? also had been tested and that their "initial data looked good."

Thesynthetic aperture radar was developed jointly by the Johns Hopkins UniversityApplied Physics Laboratory of Laurel, Md., and the U.S. Naval Air WarfareCenter in California. It will be used to detect water ice in the permanentlyshadowed regions at the lunar poles.

Themineralogy mapper NASA contributed to the mission was jointly developed by Rhode Island's Brown University and the Jet Propulsion Laboratory in Pasadena, Calif.

The mapwill be used for studying the morphology of large basins and other lunarfeatures of the Moon's polar and equatorial regions, he said. The informationwhen coupled with gravity studies will help researchers determine the densitydistribution of the crust, he said. The instrument, which will be continuouslyoperated, takes 10 measurements per second and provides range information to anaccuracy of less than five meters.

Three otherinstruments that have been working continuously since being activated beforeChandrayaan-1 reached lunar orbit are the Terrain Mapping Camera and the HyperSpectral Imaging camera, both built by ISRO, and the Radiation Dose Monitorsupplied by the Bulgarian Academy of Sciences. Data from the Bulgarianexperiment will be used for the evaluation of the radiation environment and theradiation shielding requirements of future manned Moon missions, ISRO officialssaid. "After reaching lunar orbit, the Terrain Mapping Camera has been takingbreathtaking pictures of the lunar panorama," Guruprasad said.

Thepictures and other scientific data Chandrayaan-1 is sending back to Earth arebeing received by the Indian Deep Space Network at Byalalu about 30 kilometersfrom the Satellite Control Centre at Bangalore.