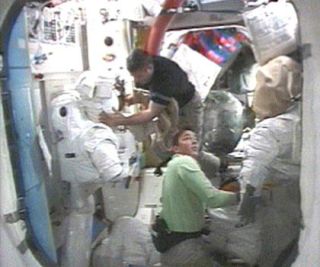 STS-126 mission specialists Heide Stefanyshyn-Piper and Steve Bowen prepare spacesuits for a Nov. 18, 2008 spacewalk, the first of four during the mission at the International Space Station.
(Image: © NASA TV.)

A pair of Endeavourshuttle astronauts will venture outside the International Space Station (ISS) todayon the first of four scheduled spacewalks to clean up a clogged solar arraygear.

SpacewalkersHeide Stefanyshyn-Piper and Steve Bowen are due to don their NASA-issuespacesuits and float outside the station at about 1:45 p.m. EST (1845 GMT)today to begin the complicated chore of de-griming and lubricating astarboard-side gear that helps the space station continuously turn its solarpanels toward the sun.

?We?regoing to going to be working on the starboard solar array system, trying tomake it come back to life,? Bowen said in a televised interview Monday. ?We?vegot a little cleaning and greasing to do.?

Today?splanned spacewalk is just the first of a four-part plan to clean the ailingsolar array gear, which has been jammedby metal grit from grinding into itself for more than a year.

Stefanyshyn-Piper,a veteran of two spacewalks, and first-time spaceflyer Bowen are taking thefirst shift. They also plan to retrieve a station nitrogen tank for return toEarth and perform other maintenance tasks, but all eyes will be on how theirgear cleaning goes.

?Certainly,the first [spacewalk] of any mission you want to go well,? space station flightdirector Holly Ridings said Monday. ?We have a lot of confidence thattomorrow?s going to go well.?

NASA'sshuttle Endeavour launchedFriday night and docked two days later on a planned 15-day mission to thespace station. Besides the four spacewalks, the seven-astronaut shuttle crew isalso delivering a cargo pod fullof life support equipment to prepare the space station to double its crewsize up to six astronauts next year.

"Forthe most part, during the early part of the mission, there?s very little freetime," said Stefanyshyn-Piper said in a preflight interview.

Stefanyshyn-Piperand her spacewalking crew will don some new NASA spacesuit gloves during theirexcursions. The new space mitts are designed to be more durable and resistantto potentially fatal cuts or slices from sharp edges on the station?s exterior.

Theastronauts will use grease and space wipes to clean the metal filings and gritfrom the starboard solar array gear, where a previous spacewalker discovered thedamage in October 2007.

Thatcritical Solar Alpha Rotary Joint (SARJ) is a massive, 10-foot (3-meter) widegear that allows the station's starboard solar panel to turn like apaddlewheel. Future enlarged crews will draw additional power from the spacestation, and so the extravehicular activities (EVAs) are focused on getting thesolar array gear unstuck.

"Thelion?s share of those EVAs will be devoted to repairing this large alpha jointwhich was deemed to be in a state of disrepair because it was essentiallydisintegrating," explained Endeavour commander Chris Ferguson in apreflight interview.

"Partsof the protective coating were coming off and we had to lock one of thosecritical alpha joints," he added. "So it?s hoped through the effortsof our four EVAs that we could lubricate and change out some components toenable those alpha joints to completely function normally again."

Astronautswill remove 11 bearings in the joint and replace them with new ones over thecourse of the four spacewalks, while also cleaning off troublesome debris. Theywill also do preemptive cleaning on the portside solar array gear during thefourth spacewalk, after taking care of the ailing starboard gear.

"We?llreplace some of the bearing assemblies, and then we?ll bring them home so thatthat will give more information for the engineers here on the ground to look atand to try to come up with the, with the root cause," Stefanyshyn-Pipernoted.

Thespacewalkers have repurposed a space caulk gun initially developed as part ofNASA?s shuttle heat shield repair plan to squeeze out gray Braycote vacuum greaseto lubricate the joint. A scraper similar to a putty knife can dislodge debristhat has become stuck on any surfaces. Wet wipes will help clear away metalfilings and grit, and special bags are available to catch the clouds offilings.

Stefanyshyn-Piperexpressed hope that the four spacewalks would both fix the current problem andhelp extend the life of the solar array gear.

"Butthat?s not a task that can be done in just a couple of hours so our work on theSARJ is spread out over three EVAs," she added. "On EVA 1 we juststart it."