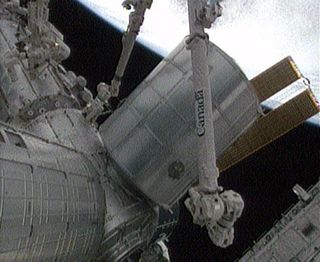 It wasmoving day at the International Space Station Monday as astronauts aboardNASA?s shuttle Endeavour delivered a portable room packed with new homeadditions for the orbiting laboratory.

Using thespace station?s robotic arm, astronauts plucked the Italian-builtcargo module from Endeavour?s payload bay and attached it to an Earth-facingport on the orbiting lab?s Harmony connecting node so its vital contents ofspace bedroom, bathroom and kitchen hardware can be moved in later this week.

Endeavour dockedat the space station on Sunday to deliver its cargo and a new crewmember tothe outpost?s Expedition 18 crew during a planned 15-day mission that includesfour spacewalks.

?It?s a bigparty up here with 10 people, it?s amazing,? said newly-minted Endeavourastronaut Greg Chamitoff after the docking. Chamitoff has lived aboard the stationsince June and joined Endeavour?s crew late Sunday after his replacement,fellow NASAastronaut Sandra Magnus, arrived aboard the shuttle.

The cargopod move began at about 11:45 a.m. EST (1645 GMT), when astronauts used thestation?s Canadarm2 robotic arm to latch onto Leonardo, a Multi-PurposeLogistics Module (MPLM) the size of a small, 25-passenger school bus. With adelicate touch, Endeavour mission specialist Don Pettit and his crewmatesattached the module in place and began work to pressurize it so interiorhatches can be opened.

The heftycargo module is laden with 16 supply racks, each as big as a refrigerator, and12 extra bags of stuff added just to fill in its conical end cone.

While the12-ton Leonardo module is filled with more than 14,000 pounds (6,350 kg) ofcargo, the focus of Endeavour?s crew is on delivering new gear so the stationcan jump to larger, six-person crews next year. The outpost needs to double itscurrent three-astronaut population to handle the orbital maintenance andscientific research required for the growing laboratory, mission managers havesaid.

Chief amongthe new life support gear to be delivered are a spare $19 million bathroom,second kitchen, two new bedrooms, an exercise machine that offers more than 29different workouts and a $250million recycling system that filters urine, sweat and other wastewaterthrough a seven-step process to turn it back into drinkable water. A repurposedspace cooler will serve as a space station fridge to give expedition astronautsconstant access to cool drinks for the first time in eight years aboard theorbiting lab.

?Thismodule is sort of like a transportainer that you see being loaded on ships,?Pettit said in a preflight NASA interview. ?We?re taking a new toilet. We?retaking regenerative life support. We?re taking a new galley. We?re takingsleeping quarters, finished carpentry-type work to outfit a space stationthat?s still under construction.?

Pettit isEndeavour?s loadmaster, the astronaut in charge of making sure every bit ofcargo makes the move from the Leonardo module into the station, and that everybit of the station?s trash or unneeded equipment makes the return trip back toEarth.

?It?s kindof like doing a Rubik?s Cube,? Pettit told SPACE.com of the transfer chorebefore launch. ?It is packed, really packed.?

Altogether,Endeavour astronauts have about 105 hours of cargo transfer work to performduring their flight, but only 98 hours actually set aside to do it. Missionmanagers are confident, however, that Endeavour?s supplies can support at leastone extra day to give shuttle astronauts more time to haul cargo.

?From aconsumables standpoint, we have more than adequate margin to support an extraday right now,? Sarafin said Sunday. But the decision on when to officiallyextend the spaceflight one extra day will be made later in the mission, headded.

Missionmanagers were prepared to delay today?s move of the Leonardo cargo module if anextra inspection of the heat shielding along Endeavour?s starboard wing wasrequired, since parts of the wing would be out of reach once the module was inplace. But image analysts found no reason to call for the extra inspection,setting the stage for today?s orbital move.

Elsewhereaboard the space station, astronauts are preparing for the first of fourspacewalks scheduled during Endeavour?s docked mission. That spacewalk is setfor Tuesday and will feature the retrieval of an empty nitrogen tank, the installation of a spare part for the station?scooling system and the first attempt to clean a balkysolar array gear on the outpost?s starboard side.