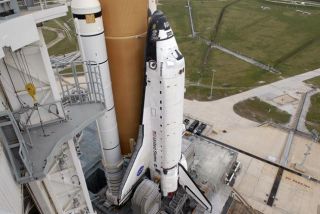 CAPECANAVERAL, Fla. - When NASA?s shuttle Endeavour launches toward theInternational Space Station this Friday, it will be hauling the mother lode ofnew gear for some orbital renovations.

Set to rideup to the station aboard Endeavour are a spare space toilet, a secondkitchen, a two new bedrooms, gym equipment and a novel system to recycle urineinto fresh drinking water. Consider it a high-tech version of ?This Old House?in space.

?They?rekind of billing it here as like extreme home improvement,? Endeavour commanderChris Ferguson said in an interview. ?You can build a skyscraper, but it?s nota living building until you put in the plumbing and you put in the electricalwork. And that?s what we have the privilege of doing.?

?It?s sucha large vehicle that just the maintenance of such a vehicle with athree-person crew gets to be difficult,? said Mike Suffredini, NASA?s stationprogram manager, of the outpost?s need to boost crew size.

The stationis currently home to U.S. astronauts Michael Fincke, Greg Chamitoff and Russiancosmonaut Yury Lonchakov. But to handle the needs of three more live-inspaceflyers the station needs more water and other vital supplies.

Thecenterpiece of the new life support equipment aboard Endeavour is the waterrecovery system, which uses filters and other processes to recycle urine into apristine water supply for drinking and technical use.

Stationastronauts currently use just under a gallon of water (3.5 liters) per day,with just over half of that provided by NASA shuttle?s and cargo ships fromRussia and Europe. The remainder is recovered condensate from the interioratmosphere of the station.

With theaddition of the new waste water recovery system in action, the station wouldrequire less water deliveries from visiting spaceships for six-person crews. Ifit performs as advertised, the system could cut the annual delivery water costsfor the station by about 15,000 pounds (6,803 kg) or mass, or about 743 gallons(2,850 liters), NASA officials have said.

?It?s sortof one of those horrible and fascinating kind of things. It?s like, ?You?regoing to drink urine??? said Endeavour astronaut Sandra Magnus, who will helpinstall the system, then stay aboard to join the station?s Expedition 18 crewto fully test it. ?We?re not, we?re drinking processed water that started asurine.?

People onEarth drink processed water everyday without knowing it, she added. But theprocess is longer, starting in rivers, and running through filtration plants,faucets or toilets before being filtered once more and put back into the Earth. The steps are shorter in space.

?So theick factor is a little bit more in your face,? Magnus said. "The water that?sgoing to be coming out of this water recovery system is going to be prettyclean. Probably up to some of the highest standards that we have for water inthe United States, if not over that.?

?It turnsyesterday?s coffee into today?s coffee and, in turn, it makes today?s coffeeinto tomorrow?s coffee,? he said in a NASA interview. ?It?s one of these great,circle of life things.?

To supportlarger crews, the station also needs new bedrooms and - perhaps more importantly- a spare bathroom. NASA bought the new $19million toilet from Russia, which already has one space commodeaboard the station.

?Absolutelycritical to everybody?s health and well being in space is to have an operabletoilet,? Ferguson said in a NASA interview. ?So this gives us an opportunity tohave a spare there.?

Endeavouris also carrying the Advanced Resistive Exercise Device, an all-in-one gymcapable of giving astronauts more than 29 different workouts to keep theirmuscles strong during the long months living without gravity. A science rack toallow experiments to study the physics of combustible gases in weightless isalso packed away with other equipment.

The two newsleep compartments are also vital, though perhaps not spacious. They have aboutas much room inside as a large refrigerator, but are built with extra radiationshielding and hookups for computers and climate control, said Kevin Engelbert,Endeavour?s launch package manager.

The secondship?s galley sports the first-ever refrigerator that astronauts canuse to store or chill food items. To date, the station?s kitchenette hasoffered astronauts a choice between hot water and lukewarm water for drinks orfood rehydration.

?Mike?slooking forward to just putting drinks in there and just letting them cooldown,? said Magnus, referring to station commander Fincke.