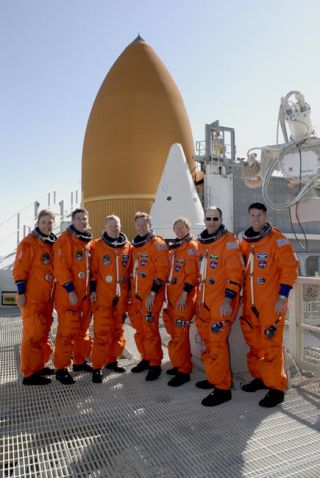 On the 225-foot level of Launch Pad 39A at NASA's Kennedy Space Center in Florida, the STS-126 crew poses for a group photo as they prepare for a Nov. 14, 2008 launch. From left are Mission Specialists Heidemarie Stefanyshyn-Piper and Steve Bowen, Pilot Eric Boe, Commander Chris Ferguson, and Mission Specialists Sandra Magnus, Donald Pettit and Shane Kimbrough.
(Image: © NASA/Troy Cryder)

WASHINGTON- Seven astronauts are set to rocket toward the International Space Stationaboard NASA?s shuttle Endeavour next week to help outfit the orbitinglaboratory to support double-sized crews.

?It isindeed an extremely packed timeline,? Ferguson told reporters in a Mondaybriefing, adding that his crew is ready. ?I think everybody is very well-versedin the activities they need to do, and when they need to do them to get the jobdone.?

A veteranof one spaceflight, Ferguson will lead Endeavour?s five-man, two-womancrew on a busy mission that includes a one-astronaut swap for the station'sthree-person crew, the delivery of new gear designed to double the outpost?screw sizes next year, and four complicated spacewalks to clean and grease up amassive - but damaged - solar array joint.

Themission will also ferry astronaut Sandra Magnus to the space station,where she?ll replace Chamitoff as a member of the Expedition 18 crewuntil her own relief arrives early next year.

Endeavour's missionwill mark NASA?s fourth shuttle flight this year, the most since 2002, and amilestone in the nearly decade-old International Space Station.

?[Thismission] is a major step for the program where we bringup the hardware that is necessary to allow us to transition to a six-personcrew,? said Mike Suffredini, NASA?s space station program manager.

Not onlywill larger crews be better equipped to handle daily maintenance of the growingstation, they will also be able to accomplish more scientific research,Suffredini said, adding that the first six-person crew is slated to reach fullstrength in May 2009.

The fourspacewalks are also vital, Suffredini explained, because they are aimed atcleaning and greasing up a vital gear on the station?s right side. The 10-foot(3-meter) wide gear is designed to rotate the station?s starboard solar arrays sothey continuously track the sun to maximize power production. But metal grit has damagedthe gear, forcing engineers to move the starboard arrays only intermittently.

Endeavourastronauts plan to use all four spacewalks to methodically clean the gear ofgrit, add a fresh coat of grease and replace 11 bearings during the mission.They are also expected to grease up the portside solar array gear, which hasbeen working perfectly, just for good measure.

Missionmanagers and the astronauts both expressed utmost confidence that the maintenanceand repair work would do the trick.

Endeavour?screw are also preparing for a pair of other milestones during their flight. Theastronauts will be in space for the 10th anniversary of launch of the spacestation?s first module, Russia?s Zarya control module, on Nov. 20 and celebratethe American Thanksgiving holiday after undocking from the orbiting lab.

?We arerumored to have stowed away at least seven turkey dinners,? Ferguson said witha smile.