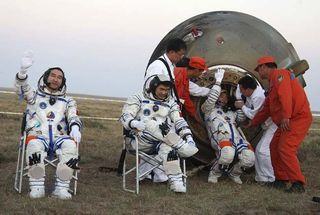 WASHINGTON — The Shenzhou 7 mission and spacewalk should serveas a reminder that China is building space capabilities that could surpass U.S. technological advances and boost China's diplomatic and economic ties with its allies, a panelof experts said here Oct. 8.

China's success thisdecade with three human spaceflight missions, including Shenzhou7 in September, as well as the development of remote-sensing and satellitenavigation systems, two satellite export deals and the January 2007 use of anantisatellite weapon to shootdown one of its own satellites punctuate China's broader national interestto become a "comprehensive power," the panelists said.

They warned that China's space program is dominated by young aerospace engineers who could help propel the nation'sadvancements past the United States, which faces difficulty replacingits aging aerospace work force.

"A newcomer like China [is] going to take a slice of a very stable pie, which means there are going to beother losers. Will it be the U.S., Europe, Russia? It's going to be somethingdifficult that we'll have to contend with," said Kevin Pollpeter, Chinaprogram manager for the Defense Group Inc.'s Center for Intelligence, Researchand Analysis in Washington. "China's rise in space power is a negative sumconsequence for the United States."

China has closely guarded its space budget, in large partbecause it is dominated by the military, panelists said. Chinese leadersreported that the Chang'e lunar program cost "no less than building a mileof subway in Beijing," Pollpeter said.

While concerns lingerabout China's January 2007 shootdown of one of its own weather satellites withan antisatellite missile, or A-Sat, China primarily sees space as a diplomatictool. China prefers jamming and dazzling satellites rather than more aggressiveaction, said Dean Cheng, senior Asia analyst with CNA Corp. in Alexandria, Va. Jamming is intentional interference with satellite signals; dazzling isilluminating a satellite with a laser in order to blind it.

"We do not at thistime have a very good sense of how the PLA would necessarily operate in spacein order to secure space dominance," Cheng said. "What we do find inPLA writings are certain key themes: the ability to provide informationsupport, the ability to take on both offensive and defensive positions in spaceand ? space deterrence."

One way to mitigate theperception would be to emphasize the peaceful uses of space and cooperationwith other nations, Pollpeter said.

Panelists also said the U.S. space industry should relate its relevance to people the way China's space officials routinelydiscuss the economic, diplomatic and political benefits of a strong spaceprogram.