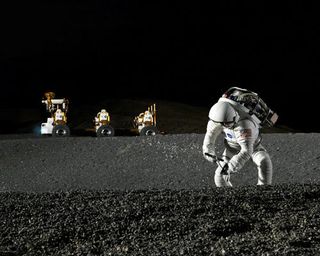 Spacesuit engineer Dustin Gohmert simulates work in a crater of Johnson Space Center's Lunar Yard, while his ride, NASA's new lunar truck prototype, stands ready in the background. The rover has the ability to lower itself all the way to the ground, making climbing on and off easy -- even in a bulky spacesuit.
(Image: © NASA)

GLASGOW, Scotland — NASA Administrator Michael D. Griffindefended his agency's determination to establish a lunar colony beforeembarking on a manned Mars mission Sept. 30, arguing that those who prefer tofocus only on Mars are overestimating what is known about the Moon andunderestimating the difficulties of going to Mars.

Addressing the International Astronautical Congress here,Griffin said the U.S.Apollo program spent a total of just 27 working days on the Moon, which hesaid is as big as Africa and merits substantially more exploration.

Several space agencies, including some in Europe, saytheir scientists are much less interested in the Moon than in Mars and that,since doing both is beyond their means, are weighing whether to focus on Mars.

Griffin wondered whether those pushing Mars-orientedefforts are fully cognizant of the difficulties of sending astronauts to Mars,and the amount of preparation needed before a mission is pursued.

Griffin said that before any attempt to send a crew toMars is made, the sponsoring agency or agencies must at least be able toconduct the following mission:  Send astronauts to the international spacestation for a six- or nine-month visit, after which they would be sent to theMoon for a similar amount of time, equipped with no additional supplies beyondthose sent with them to the station.

Once they completed their Moon visit, this same group ofastronauts would return directly to the space station for another six- tonine-month visit, again with no resupply.

Only then would they return home. Griffin said thismission would simulate what it will take to send astronauts to Mars and returnthem home.

"I am not saying that we have to have conducted sucha mission, but that we have to be confident in our ability to conduct it beforewe send astronauts to Mars," Griffin said. "Otherwise, the crew wesend to Mars willnot come back."