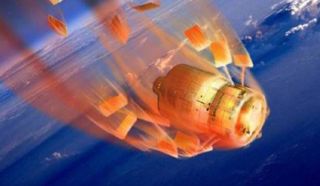 An artist's illustration of ESA's Jules Verne ATV breaking up during its Sept. 29, 2008 reentry.
(Image: © ESA/D.Ducros.)

A Europeanspace freighter the size of a London double-decker bus is headed for a fierydeath on Monday with a team of scientists hoping for a ringside seat.

Researchersfrom NASA, the European Space Agency (ESA) and other groups are preparing towatch from afar as the unmannedcargo ship Jules Verne plunges through the Earth?s atmosphere and burns upover the Pacific Ocean after a successful supply run to the International SpaceStation. The spacecraft?s demise will mark a dramatic end for the first of ESA?snew fleet of Automated Transfer Vehicles.

?With thereentry of Jules Verne, there is a certain sadness at the conclusion of whathas been such a successful mission,? ESA?s ATV mission manager John Ellwoodtold SPACE.com. ?However, we know that all the mission requirements weremet or exceeded and this has given a great satisfaction to the enormous teamwhich has worked on this amazing project.?

Flightcontrollers at ESA?s ATV Mission Control in Toulouse, France, are expected todirect the 19-ton Jules Verne to fire its engines one last time at 9:30 a.m.EDT (1330 GMT) on Monday to start a controlled death dive. About 12 minutesafter tumbling into the Earth?s atmosphere, the spacecraft should burst intopieces and burn up, with any remaining fragments splashing into the Pacific Ocean.

?We knowtheir size and their impact speed, and we know the exact moment they?re comingdown,? said Peter Jenniskens, the observation campaign?s mission scientist atNASA?s Ames Research Center and the SETI Institute in Mountain View, Calif. ?Noneof that happens with natural fireballs, so with these events you can set yourcameras up and you can wait for it and observe it come in.?

Thespacecraft is designed to be disposable and undocked from the space station onSept. 5. ESA officials plan to build at least five ATVs to resupplyspace station crews in return for European astronaut slots on futurelong-duration missions. Jules Verne?s successor, ATV 2, is under constructionfor launch in 2010.

Jenniskensand his team hope to track Jules Verne?s reentry as the spacecraft fliesbetween 46 and 31 miles (75-50 km) above the Pacific Ocean.

?It?s a largeobject, so it should be bright enough for us to observe really well,?Jenniskens told SPACE.com. ?And it?s a destructive reentry, so it?s an objectthat?s not protected by a heat shield. It?s going to break into pieces.?

Pastreturning spacecraft, like NASA?s 2006Stardust landing and 2004 reentry of Genesis, were protected by a heatshield, giving observers a single, bright target. Jules Verne is unprotected,with much of its reentry light coming from its melting aluminum hull and shockemissions, Jenniskens said.

?We havesome idea for what you can expect we made some predictions based on the ATVbeing intact?but what we?re going to see, that?s the big question,? saidJenniskens. ?It?s very exciting.?