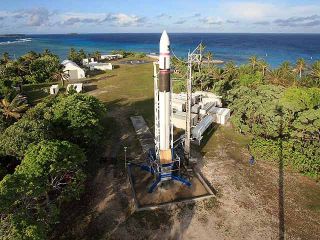 SpaceX's Falcon 1 Flight 4 on the launch pad at Omelek Island in the Kwajalein Atoll of the Marshall Islands on Sept. 19, 2008.
(Image: © SpaceX)

WASHINGTON ? Space Exploration Technologies (SpaceX) is nowshooting for no earlier than Sept. 28 for the next launch of its Falcon 1rocket.

SpaceX had been planningto launch as soon as Sept. 23 but a static fire test conducted three daysearlier has prompted to the Hawthorne, Calif.-based company to take more timebefore attempting what would be the Falcon 1?s fourth launch.

?The static fire took place on Saturday [20 Sep 2008, CAtime], as expected, and no major issues came up. However, after a detailedanalysis of data, we decided to replace a component in the 2nd stage engine[liquid oxygen] supply line,? SpaceX chief executive Elon Musk wrote in a Sept.23 update.? ?There is a good chance we would be ok flying as is, but we arebeing extremely cautious.?

A Falcon 1 failedto reach orbit for the third consecutive time Aug. 3 when a staging issuebrought the flight to an end about two minutes and 20 seconds into the flight.Musk said at the time that fixing theproblem would be as simple as inserting more time between the separation ofthe rocket's first stage and the ignition of its second-stage engine.

Musk wrote in a previous update that it was possible SpaceXcould encounter issues during the upcoming preparations that would cause thecompany to forfeit its late September launch window, forcing the company topostpone to the next available window in late October.

All three Falcon 1 launches have been conducted from theU.S. Army's Reagan Test Site in the central Pacific Ocean.