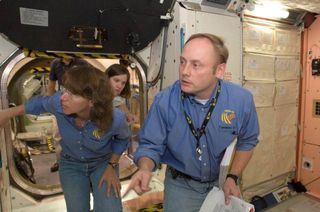 WASHINGTON - America?s next space tourist and a new spacestation crew are gearing up for an October launch to the International SpaceStation (ISS).

Garriott, the sonof former NASA astronaut Owen Garriott, who flew aboard the U.S. Skylabstation and a U.S. shuttle, is set to become the first second-generation U.S.spaceflyer. He is flying under a $30 milliondeal brokered with Russia's Federal Space Agency by the Virginia-based firmSpace Adventures to visit the ISS for about a week.

?To be frank this price tag is the majority of my wealth, tobe honest,? Garriott said Wednesday at a NASA briefing in Houston. ?The reason whyit?s worth that to me is that this is the goal I?ve been working toward for asignificant portion of my adult life.?

The Austin, Texasresident is famous for creating the ?Ultima? series of online computergames. His latest release, ?Tabula Rasa,? is an online science fiction gamechronicling humanity?s exodus from Earth after a major cataclysm. He plans tocarry a so-called ??immortality drive,? a flash drive repository ofinformation, including digital versions of the DNA from some computer gamers,copies of the avatars in one of his games, as well as an archive of mankind?sgreatest achievements.

?Since I?m getting a chance to go to space myself, I wouldbe remiss without finding a way to connect to the community of gamers fromspace,? Garriot said.

Garriott will be the sixth space tourist to vacation at theISS. He plans to devote his stay to research, including protein crystallizationand Earth observation experiments, with his father serving as chief scientist.He is scheduled to return to Earth with Expedition 17 Commander Sergei Volkov,himself a second-generation cosmonaut, and flight engineer Oleg Kononenko onOct. 23 in a Soyuz.

Fincke, who made one previous trip to the space station as aflight engineer on the Expedition 9 crew, is set to lead the new Expedition 18 crewas commander. Lonchakov will serve as flight engineer. The main goal of theirmission is to outfit the ISS to host six-personcrews, double the population of its current three-person capacity.

?It?s going to take us a lot of work, but it?s the next stepin getting the space station fully operational and we?ve got the right crew forit,? Fincke said. ?We think of ourselves as a can-do crew.?

Two other members of the Expedition 18 crew, NASA astronautSandra Magnus and Japan Aerospace Exploration Agency astronaut Koichi Wakata,are scheduled to fly on later shuttle missions. Magnus plans to ride aboard theNovember STS-126mission to become a space station flight engineer, while Wakataintends to arrive on the STS-119 mission in early 2009 to relieve her.

One member of the Expedition 18 crew is already aboard thespace station. NASA astronaut Gregory Chamitoff, who launched to the ISS inJune, is currently serving as a flight engineer with the station?s Expedition17 crew. He plans to stay aboard with Fincke and Lonchakov for the first stageof Expedition 18 before turning his slot over to Magnus in November.