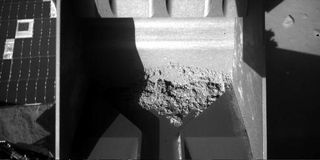 Phoenix's scoop after it had been inverted and a motor in the scoop had been run to jar the sample of icy dirt loose. The image, taken on July 28, shows that much of the sample remained stuck inside the scoop.
(Image: © NASA/JPL-Caltech/University of Arizona/Max Planck Institute)

The icy dirt mixture that NASA's Phoenix Mars Lander is trying to sample is surprisingly sticky, mission scientists learned this weekend, as they tried to deliver a clump to one of the craft's instruments.

The difficulties of delivering the sticky dirt, thought to be a mixture of water ice and dust and other unknown minerals similar to terrestrial soil, but without microbes, to one of the ovens in Phoenix's Thermal and Evolved-Gas Analyzer (TEGA) are forcing scientists to delay those plans and dig for another sample of dry dirt instead. The lander analyzed its first dry dirt sample about a month ago.

"While we continue with determining the best way to get an icy sample, we intend to proceed with analyzing dry samples that we already know how to deliver," said Phoenix principal investigator Peter Smith, of the University of Arizona.

Phoenix mission controllers have been scraping up samples from the subsurface rock-hard ice layer and testing out methods to deliver an icy sample to TEGA since mid-July. TEGA heats up the samples and then analyzes the vapors they give off to determine the sample's composition.

Phoenix has been analyzing samples of the Martian regolith since its landing on May 25 and looking for signs of potential habitability in the planet's past.

The Phoenix team tried two methods of picking up and delivering a sample of the icy dirt over the weekend. In both cases, most of the sample stuck inside the lander's inverted scoop, at the end of its 7.71-foot (2.35-meter) robotic arm.

"It has really been a science experiment just learning how to interact with the icy soil on Mars ? how it reacts with the scoop, its stickiness, whether it's better to have it in the shade or sunlight," Smith said.

Images returned early Monday showed a small amount of soil reached the screened opening of the target TEGA oven, but other data from the spacecraft indicated that not enough of the dirt had been funneled into the oven to begin an analysis.

The Phoenix team encountered the same problem with the first dirt sample they delivered to TEGA on June 10. After several trials of vibrating the machine, the dirt fell into the oven. The team tried to use vibration to deliver the icy sample on Sunday as well, although this time they used a motor to vibrate the scoop while holding it upside down over the oven.