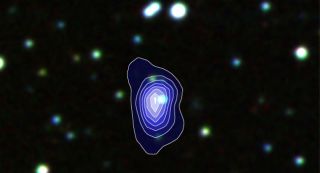 The nova V598 Puppis, accidentally discovered in the XMM-Newton slew survey. The X-ray contours, which indicate the position of the nova, are overlaid on image composite (infrared, red and blue channels) from the SuperCOSMOS Sky Surveys (SSS), Royal Observatory, Edinburgh.
(Image: © ESA/XMM-Newton/EPIC (A. Read et al.)/SSS)

An orbiting X-ray observatory has discovered an exploding star in the Milky Way which somehow escaped notice by the usual crowd of star gazers.

Calculations show that the star’s sudden brightness was clearly visible to the naked eye, but no one reported anything until the European Space Agency’s XMM-Newton telescope spotted an unexpected burst of cosmic X-rays.

On Oct. 9, 2007, XMM-Newton was turning from one target to another when it passed across a bright source of X-rays that no one was expecting. The source was not listed in any previous X-ray catalog, yet the mysterious object was lighting up XMM-Newton’s view of the cosmos.

The XMM-Newton team looked up three possible celestial candidates as at this location, including a normally faint star known only by its catalog number USNO-A2.0 0450-03360039. Acting quickly, Andy Read of the University of Leicester and Richard Saxton of ESA's European Space Astronomy Centre (ESAC), Spain, e-mailed other astronomers about the newly-discovered X-ray source.

Astronomers turned to the 6.5-meter Magellan-Clay telescope at Las Campanas Observatory in Chile, and found that USNO-A2.0 0450-03360039 had become 600 times brighter than normal. Analyzing the light from the source meant that they could classify the object as a nova.

Novae occur when a small, compact star, called a white dwarf, feeds off the gas of a nearby companion star. Gas builds up on the white dwarf until a nuclear reaction begins releasing large quantities of
energy, causing the white dwarf to explode in brightness.

That led to a puzzle. An explosion of this type does not immediately release X-rays, because the expanding cloud of debris created in the detonation temporarily masks them. That meant the explosion must have taken place many days before XMM-Newton spotted the X-ray burst, although no one reported seeing it.

Amateur and professional astronomers usually find novae by regularly sweeping the night sky for stars or other objects that suddenly brighten — but humans are not alone in watching the sky. Saxton contacted the robotic All Sky Automated Survey project and asked astronomers to check their data. They found the nova had taken place on June 5, 2007, and had been clearly visible, and that it would have been bright enough to see with the unaided eye.

"Anyone who went outside that night and looked towards the constellation of Puppis would have seen it," Saxton says.

The nova has now received the official name of V598 Puppis and has become one of the brightest for almost a decade, despite not getting spotted during its brilliant peak. As news of its existence spread, the global effort to track its fading light became intense.

"Suddenly there was all this data being collected about the star,” Read says. “For variable star work like this, the contribution of the amateur community can be at least as important as that from the professionals.”

This story has a happy ending thanks to XMM-Newton, which has covered 30 percent of the sky and documented 7,700 X-ray sources. However, the event does make astronomers wonder whether there are other discoveries going unnoticed.