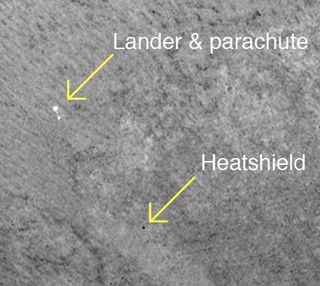 The small dark dot that mission scientists think is Phoenix's discarded heat shield can be seen in the image just below the white smudge of the lander and its parachute descending through the Martian atmosphere.
(Image: © NASA/JPL/University of Arizona)

A new analysis of an unprecedented snapshot of NASA's Phoenix Mars Lander descending to the surface of Mars has turned up more detail, including a dark spot that is likely the spacecraft's jettisoned heat shield.

NASA's Mars Reconnaissance Orbiter (MRO), currently circling the red planet, took the image of Phoenix suspended from its parachute as it fell to the Martian surface at 7:36 p.m. ET on May 25. The orbiter used its High Resolution Imaging Science Experiment (HiRISE) camera. The image made history as the first ever taken of a spacecraft as it descended toward the surface of another planet.

MRO was about 475 miles (760 kilometers) away when it pointed its camera at Phoenix. In the image, both the 30-foot-wide (10-meter) parachute and the aeroshell protecting the lander are clearly visible. Even the lines connecting the parachute to the lander can be seen.

After further analyzing the image, the HiRISE team discovered a small, dark dot located below the lander (which appears as a white smudge). Team members think this dot is Phoenix's heat shield, which was discarded after the parachute was deployed. (The heat shield protected the lander from burning up when it entered Mars' atmosphere and quickly decelerated because of friction.)

"Given the timing of the image and of the release of the heat shield, as well as the size and the darkness of the spot compared to any other dark spot in the vicinity, we conclude that HiRISE also captured Phoenix's heat shield in freefall," said HiRISE principal investigator Alfred McEwen of the University of Arizona.

The image also includes two colored swaths recorded by red, blue-green and infrared detectors. The color bands missed the spacecraft, but do show frost or ice in the bowl of the relatively young 6-mile (10-km) wide impact crater unofficially called "Heimdall" that dominates the image. The frost shows up as blue in the false-color HiRISE data and is visible on the right wall within the crater.

Although Phoenix appears to be descending into the crater, it (and its heat shield) actually landed 12 miles (20 km) away. The $420 million mission is slated to run for three months and is searching for signs of past and present habitability in the Martian soil.