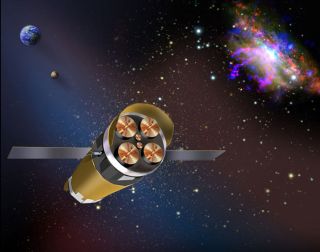 An illustration of the Constellation-X Observatory.
(Image: © NASA)

A silicon device with thousands of slats of tiny mirrors lined up to resemble a jalousie window could speed the efficiency of NASA's next generation space telescope, the Constellation-X Observatory, according to a team of scientists at the Massachusetts Institute of Technology (MIT), in Cambridge.

The scientists created what they call the Critical Angle Transmission grating, a device that uses nano mirrors to diffract X-ray and extreme ultraviolet range beams without the energy absorption that typically occurs with X-ray diffraction gratings, said Ralf Heilmann, associate director of MIT's Space Nanotechnology Laboratory at the Kavli Institute of Astrophysics and Space Research.

Scientists use diffraction gratings in space telescopes such as NASA's Chandra X-ray Observatory as a tool to aid their search for clues to the formation of the universe. It is work that must be conducted in space because Earth's atmosphere absorbs X-ray energy. Diffraction gratings, which are a common physical science tool, disperse X-ray wavelengths in much the same way a prism refracts visible light.

The MIT grating was invented during research and development for NASA's Constellation-X program, a proposed mission to fly several X-ray telescopes working in unison. These telescopes will investigate black holes, galaxy formation, the recycling of matter and energy, and dark matter and dark energy.

Based on more than two decades of work that included optics for Chandra, MIT scientists set out to create a device that would disperse X-ray wavelengths without absorbing the wavelengths' energy. The scientists found that tightly spaced silicon mirrors reflect wavelengths rather than absorbing them, allowing the wavelengths to be redirected at angles that allow a broader view of their spectra, said Mark Schattenburg, director of the Space Nanotechnology Laboratory.

"We're getting five times more throughput than with Chandra," Schattenburg said. "For every 10 X-rays through Chandra's telescope, only one to two gets detected. At least five times more get through the nano mirrors so we're boosting the percentage of efficiency."

The silicon slats are as thin as 35 nanometers — the size of some of the smallest computer chip transistors and wires under commercial development. The thousands of long, thin slats are spaced about 150 nanometers apart at a shallow angle that allows the X-rays to skip from the smooth sidewalls of the slats through the spaces between the slats.

Heilmann said the new technology could be used in a wide array of instruments, from those involved in plasma physics to the life and environmental sciences. The principles of diffraction and efficient reflection below a critical angle apply to neutrons and whole atoms as well, he said.

The findings were published in the June 9 edition of Optics Express, and Heilmann spoke June 23 at the SPIE (International Society for Optical Engineering) Conference on Astronomical Telescopes and Instrumentation in Marseille, France.

The team, which also includes MIT mechanical engineering graduate student Minseung Ahn, now must fine-tune the fabrication of the device, expanding it from its current size of a few square millimeters to accommodate plans for fitting it with Constellation-X's 3.7 meter diameter telescope, Schattenburg said.

"We have to make a square meter or two with very tight control of the nanogeometry," he said. "We might have to change the spacing or make some subtle change to squeeze the maximum resolution out of the telescope."