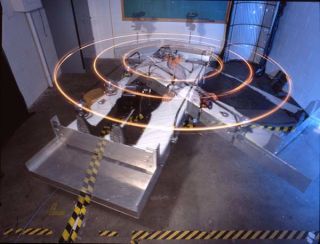 Keeping an astronaut crew in tip-top shape during lengthy treks to and from distant Mars may demand portable gravity.

There's need for long-duration space travelers to counter such debilitating effects as muscle atrophy, bone loss, cardiovascular deconditioning and balance disorders -- effects seen in humans as they cope with stints in microgravity.

Over the decades, artificial gravity research has been an on-again, off-again proposition. But in the last few years, and propelled by NASA's new Moon, Mars and beyond exploration mandate, artificial gravity studies are now being developed, this time with a new spin.

Search for the universal antidote

Young is also a professor of health sciences and technology and has long studied the role that artificial gravity might play to keep humans from weakening while slipping through interplanetary space.

"For the first time since I began working on this in the 1960s, I think it is being taken seriously. We have a critical mass of really good people working on it...and support in Washington, D.C.," Young said.

Young told SPACE.com that in the past, as space life scientists began to realize there were astronaut health issues, NASA started looking for quick, individual solutions. Tread mills, in-flight exercise, drugs -- all these and other remedies were flown to look at treating one body system at a time.

Meanwhile, Russian specialists studying their cadre of cosmonauts that had spent far longer time in Earth orbit were pointing out that the medical issues being encountered would not be easy to solve.

Starting with the Shuttle/Mir program that ran from 1995 into 1998, Young said, the search for a "universal antidote" began to move up the priority ladder.

One issue that has worked against artificial gravity advocates in the past has been the vision of a huge, rotating spacecraft that gives its inhabitants a one-gravity condition like here on Earth. And movies like 2001: A Space Odyssey helped cement that "G-whiz" image into the space psyche. But large meant expensive, and also gave engineers design worries, Young related.

In recent years, the idea has started to emerge that a short radius centrifuge contained within a spacecraft may be far more attractive. "You go into it for a workout. You get your G-tolerance buildup for a certain period of time, daily or a few times a week. That started to sound attractive to the engineers," Young said.

Nevertheless, in taking this approach, there are still issues to be reckoned with.

Support by the National Space Biomedical Research Institute (NSBRI) in Houston, Texas is allowing Young, MIT colleague Thomas Jarchow, and others to delve into short-radius centrifugation of individuals and potential side effects -- such as motion sickness, interference with cognitive and motor function caused by head movements while rotating at 180 degrees a second.

Moreover, research is also needed to assess whether or not short radius centrifuge workouts produce the needed effects on bone, muscle and fluids in the body necessary to help curb space deconditioning.

Given that it has become legitimate to start talking about a no-nonsense three-year long humans-to-Mars effort, Young said, suddenly NASA and a lot of university researchers are confronting key artificial gravity-related questions, and the need to come up with answers fairly soon.

A major undertaking in artificial gravity research is being prepared at the University of Texas Medical Branch (UTMB) at Galveston, overseen by NASA's Johnson Space Center in Houston, Texas.

Starting next year at UTMB, a corps of individuals will partake in bed rest studies that reproduce the effects of weightlessness, with half that group also rotated once a day on a centrifuge.

The new centrifuge has been built for NASA by Wyle Laboratories, headquartered in El Segundo, California, for use in studying the effects of artificial gravity as a countermeasure to the negative effects of long-term microgravity on the human body. That newly-built centrifuge has recently been installed at UTMB. "It's a really beautiful device," Young said.

Young is co-investigator for the work, teamed with William Paloski, principal scientist, in the Human Adaptation and Countermeasures Office at the NASA Johnson Space Center.

The NASA-sponsored research is divided into two phases. The first phase is using the short radius centrifuge -- which has a radius of 10 feet (three meters) radius to support NASA's Artificial Gravity Pilot Study. A second phase will include significant enhancements to the centrifuge design to provide support for a multinational artificial gravity project that would involve Germany and Russia, Young added.

The Artificial Gravity Project Pilot Study involves test subjects being placed in a six degree head-down bed-rest position which simulates the effects of microgravity on a human body. The test subjects are then positioned in the short radius centrifuge and subjected up to 2.5 Gs at their feet to simulate a gravity environment.

"As far as I'm concerned," Young concluded, "the purpose of all these studies is not to show how to use artificial gravity. Rather, it is to determine whether or not artificial gravity is an acceptable solution."

Of mice and microgravity

Carrying out artificial gravity experiments in space would be ideal, particularly doing them onboard the International Space Station. Discussions are underway in this regard, but have not yet been given a go-ahead.

In the meantime, enter the Mars Gravity Biosatellite Program. The venture is a highly student-driven initiative, combining the talents of three leading universities: MIT (lead group), the University of Washington in Seattle, and the University of Queensland, Australia.

The Mars Gravity Biosatellite Program is a mission to study the effects of Martian gravity on mammals. Data gleaned from the orbiting spacecraft would contribute to fundamental space biology, with the intent to advance the human exploration of space.

"One of the big questions is what level of artificial gravity would you need going to Mars," said Paul Wooster, program manager for the project, as well as research scientist in MIT's Space Systems Laboratory.

Wooster said the Mars Gravity Biosatellite would carry 15 mice into space, spin them up to create artificial gravity. To generate artificial gravity for the animals on board, the satellite will spin rapidly, making roughly one rotation every two seconds (34 revolutions per minute). This inward acceleration will simulate the force of gravity on the Martian surface - roughly one-third that of Earth.

The specimens would then return to Earth under parachute after five weeks of travel. "We what to see what effects can be found in their bones, muscles, and vestibular system," Wooster told SPACE.com.

While progress on designing the biosatellite has been steady, finding the needed money to complete the estimated $30 million project has been a tough assignment.

So far, about $1 million has been raised. Thanks to advisors and industry support -- and an anonymous donor willing to cover about half the cost of the payload's booster -- the work continues. Over 300 students have taken part in the endeavor since it began in August 2001, Wooster said. "If we had the money on the table today, we could launch in 2008."

"It is really rewarding and worthwhile. The students are learning a tremendous amount, a lot more by building real prototype hardware and then testing that hardware. That's better than sitting in a classroom just calculating some things," Wooster concluded.