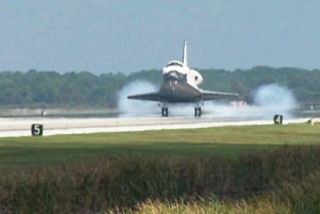 CAPECANAVERAL, Fla. — The space shuttle Discovery landed safely back on EarthSaturday to wrap up a two-week mission that delivered a new Japanese laboratoryto the International Space Station (ISS).

The shuttletouched down on a NASA runway here at the Kennedy Space Center at 11:15a.m. EDT (1515 GMT), loosing twin sonic booms as it swooped down out of themidday Florida sky with commanderMark Kelly at the helm.

“It’sgreat to be back,” Kelly replied. “And it’s great for all ofus to be part of a team that made the space station a little bit bigger and alittle bit more capable.”

Theastronauts launched May 31 and completed 217 trips around Earth during their5.7 million-mile (9.1 million-km) construction flight.

“Ithink is just a start, just a beginning,” said Hoshide before landing. “We learneda lot from this mission, so we’ll just continue to learn more.”

Weighing inat some 32,000 pounds (14,514 kg), Japan’sKibo(which means “hope” in Japanese) is 37 feet (11 meters) long, aboutthe size of a large tour bus and the largest room ever launched to the spacestation. It has two small windows, a 33-foot (10-meter) main robotic arm and asmall airlock for passing experiments out to a porch-like external platformslated to launch next year.

Nyberg saidthe views out the Kibolab’s side-looking windows were tremendous and offered a new perspectiveof Earth from the space station.

“It’sa great view looking in a direction that we can’t see in other parts ofthe U.S. segment,” she said. “Watching the sunset was my absolutefavorite, and I think we got a lot of pictures of that.”

With Kibo’sinstallation, the space station is about71 percent complete, weighs about 612,000 pounds (277,598 kg) and has aliving area about the size of the interior of a 747 jumbo jet, according toNASA and station crew. When complete, the station is slated to have about asmuch room as a five bedroom home and rival a U.S. football field in length,NASA has said.

For Reisman,Discovery’s landing marked his first taste of Earth’s gravity after95 days living in space, and he returned to Earth in a special reclined seat toease the burden. He arrived at the space station in March and was replaced lastweek by NASA astronaut Gregory Chamitoff, who launched aboard Discovery.

“I amcautiously optimistic,” he said of how his body will respond to itsreturn to gravity, adding that there is some anecdotal evidence than his shortstature may help since his sensory organs are closer to his center of gravity.“I’ve been waiting my whole life and I finally think being short isgoing to come in handy.”

It apparentlydid. After landing, Reisman was all smiles in NASA video as he walked on thetarmac with his crewmates to inspect Discovery and pose for photos.

“Hetold us, frankly, that he enjoyed feeling the sunshine again,” saidWilliam Gerstenmaier, NASA’s chief of space operations. “I think hehad a great time onboard space station.”

Reismanhas said he’s looking forward to seeing his wife Simone and cat Fuzzyagain, and digging into a juicy steak after landing.

Chamitoff,meanwhile, is beginning a six-month mission and watched a live broadcast ofDiscovery’s landing from orbit.

“Whata beautiful landing!” Chamitofftold Mission Control. “It was a spectacular mission from end toend…we have this new ‘hope’ in the Kibo module here on the space stationand it’s a great success.”

Today’slanding marked the end of NASA’s 123rd space shuttle mission and the 26thconstruction flight to the space station. Discovery made its 35th trip to spaceduring the mission, the third shuttle flight this year to deliver a new orbitalroom to the high-flying station.

NASA plansto fly 10 more shuttle flights to complete the space station and overhaul theHubble Space Telescope before retiring its aging three-orbiter fleet in 2010.The Hubble mission - the final servicing flight to the orbital observatory - iscurrently slated to liftoff on Oct. 8 pendingthe repair of its Pad 39A launch site here, which was damaged duringDiscovery’s launch.

Thesuccessful STS-124 spaceflight marked NASA’s third of up to five shuttleflights this year, with the Hubble serving mission and a fourth flight to thespace station remaining. It was the 10th mission since the 2003Columbia tragedy.

“Thewhole experience turned out to be more emotional than I’d expect,”said shuttle pilot Ken Ham. “Seeing space station out the window andrealizing that it’s all very real and we’re part of it, it’sa great time to be part of this country. It’s a pretty incrediblefeeling.”