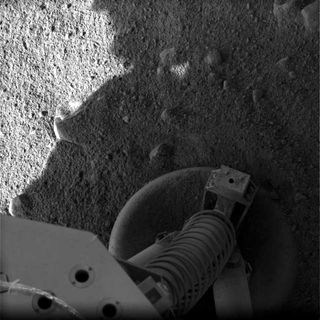 This image is a combination of several taken by the Stereo Surface Imager Left of the footpad of NASA's Phoenix Mars Lander after its successful May 25, 2008 landing in the Martian arctic.
(Image: © NASA/JPL/UA/Lockheed)

PASADENA, Calif. — NASA's Phoenix Mars Lander survived a fiery plunge through the Martian atmosphere Sunday to make a three-point landing on the red planet's arctic plains, where it beamed back its first images to the delight of mission scientists.

The spacecraft touched down in the Vastitas Borealis plains within the Martian arctic circle, where it is slated to spend at least three months searching for water ice hidden away below the frozen surface. The descent and landing sequence went completely as planned.

"This team has performed perfectly — did you see that thing zoom down and then just touch," said an exuberant Peter Smith, Phoenix's principal investigator of the University of Arizona. "It's not on a rock, it's in a safe place."

Mission scientists here at JPL received the signal that Phoenix had landed at around 7:53 p.m. EDT (2353 GMT) today, exactly when they expected to. (The probe's signals take about 15 minutes to traverse the 171 million miles (275 million km) between Mars and listening stations back on Earth.)

The $420-million Phoenix mission, which launched in August, is designed to dig down to the rock-hard layers of water ice thought to lie under the Martian soil in the northern arctic region. Phoenix's arrival marked the first successful landing on Mars since NASA's twin Spirit and Opportunity rovers bounced to a stop in 2004 and the first powered landing in more than 30 years for NASA.

The landing brings to an even 50/50 the percentage of successful and unsuccessful landing attempts on Mars (though the success rate for American landings is much higher: 6 out of 7).

"For the first time in 32 years, and only the third time in history, a JPL team has carried out a soft landing on Mars," said NASA Administrator Michael Griffin from JPL mission control. "I couldn't be happier to be here to witness this incredible achievement."

Asked what is goal for Phoenix is now, Smith replied, "Get some pictures back. We want to see Mars!" At 9:50 p.m. EDT (0150 May 26 GMT) this evening, Smith got his wish, as Phoenix sent several black-and-white images of itself and the surrounding terrain through its link with the Mars Odyssey Orbiter.

Phoenix is designed to test the Martian soil and ice for signs that the water was once liquid to see if it could have created a habitable zone for microbial life at some point in the past. The instruments include a robotic arm that will scoop up dust and ice, as well as a wet chemistry lab and tiny ovens that will analyze the soil to see what compounds might be in it.

"The science team has been waiting patiently — and they are anxious to use their instruments," said Phoenix principal investigator Peter Smith of the University of Arizona, where Phoenix will be controlled for the majority of its mission.

Scientists were apprehensive about the craft's seven-minute plunge through the Martian atmosphere, but each stage went completely smoothly.

"In my dreams it couldn't go as perfectly as it went tonight, we went right down the middle," said Phoenix mission manager Barry Goldstein at JPL, who was visibly relieved that the hardest part is over.

"We rehearsed all the problems and none of them occurred," he added at a brief press conference just after landing.

"I was right to be optimistic," Smith said, praising the mission team, adding that he had to grip his chair during the descent to keep from falling over.

The radio blackout that scientists thought might occur during initial descent (from the fiery plasma created by friction as the craft descended, which was predicted to possibly interfere with the radio signal) never happened. Mission controllers said they had a pool going as to how long the blackout would occur if it did occur. Goldstein made a bet that it wouldn't.

When asked during what part of the descent controllers felt their heart in their throat the most, Ed Sedivy, the Phoenix spacecraft manager from Lockheed Martin, said, "Well, for about the past four days," underscoring just how nervous mission scientists were about the landing.

The craft landed on flat terrain, tilted by only one quarter of a degree, meaning there were no rocks around to hinder the deployment of the solar arrays, which will provide the lander with energy for the duration of its three-month mission.

Scientists had their first linkup with Odyssey tonight, which relayed valuable information about the health of the spacecraft. These showed that the solar arrays had successfully deployed. Another image showed one of the lander's footpads flat on the ground. Another image showed the pancake-flat Martian arctic terrain, which has never been imaged from the surface before.

Phoenix joins the two Mars Exploration rovers, Spirit and Opportunity on the Martian surface. Phoenix used a different technique to guide it safely to the Martian surface (using thrusters instead of airbags) than the two rovers. Until now, the technique had not been used successfully since the two Viking landersin 1976 and was last used by the ill-fated Mars Polar Lander in 1999.

NASA's next Phoenix mission briefing will be broadcast live on NASA TV at 12:00 a.m. EDT (0400 GMT) on Monday, May 26 Click here for SPACE.com'sPhoenix mission coverage and a link to NASA TV.