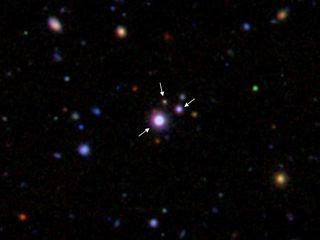 If you thought one black hole was scary, be very afraid,because triple black-hole mergers are a real possibility in the universe,according to a new supercomputer calculation.

Astrophysicists used a computer model to predict what wouldhappen if several black holes were to orbit each other. Often the trio would mergeinto one giant black hole.

"In our simulations we see three possibilities,"said Carlos Lousto of the Rochester Institute of Technology's Center forComputational Relativity and Gravitation, who built the model with colleaguesManuela Campanelli and Yosef Zlochower. "They can mesh together into onebig black hole, or two can mesh while the third orbits around in a veryelliptical orbit. And a third possibility is that all three fly apart."

Lousto said this trio would probably collide eventually,though they are far enough apart it would likely take longer than the currentage of the universe.

The merger of three black holes would be one of the mostenergetic events in the universe, releasing tons of energy in the form of gravitationalwaves, or warps in space-time.

So far, scientists have been unable to detect gravitationalwaves, which are predicted by Einstein's General Relativity. Physicists hopethat may change soon when the first sets of data are analyzed from theground-based detector known as the Laser Interferometer Gravitational WaveObservatory (LIGO)and the future NASA/European Space Agency space mission Laser InterferometerSpace Antenna (LISA).

"We really hope we can detect gravitationalwaves," Lousto said. "That?s why our simulations are important. Weneed a model to predict what we would see. It tells the people who do thoseexperiments what kind of signature is characteristic of black holes."

The scientists' model simulates the simplest case of a blackhole triplet: three non-spinning black holes of equal masses. They plan toexpand their models to include more complex systems.

The researchers will detail their findings in the May issueof the journal Physical Review D. The team is also set to present theirsimulations at the annual meeting of the American Physical Society in St. Louison April 14.