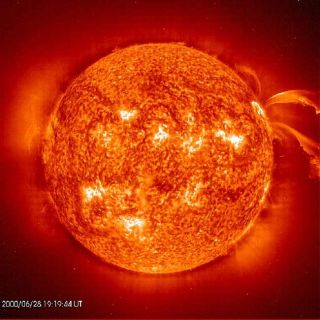 Erupting clouds of plasma are suspended in the Sun's hot corona. Every feature in the image traces magnetic field structure.
(Image: © ESA)

Here's a strange scenario: You move farther away from afire, getting cooler and cooler, until suddenly you are burning up.

That's essentially what happens in the sun: Its outer layer,the corona, is inexplicably hot. A new study may complicate things further bypoking holes in a leading theory that aims to account for the puzzlingphenomenon.

Last year, astrophysicist Steve Tomczyk of the National Center for Atmospheric Research in Boulder, Colo., and his colleagues assertedthat corkscrew-shaped Alfv?n waves were converting the motion energy of thesun's roiling material into heat.

But the authors of the new study argue that the waves Tomczyk'steam saw were not Alfv?n waves but kink waves.

"Kink waves look like kinks in hair or rope," said University of Warwick astrophysicist Tom VanDoorsselaere, one of the researchers behind the new study. "Kinkwaves can't explain why thecorona is so hot. They carry less energy with them."

Van Doorsselaere said he and hiscolleagues used a more complex model than Tomczyk and found that the wave observations are not consistentwith Alfv?n waves, and must be kink waves.

"At the moment I can't seeany other explanation that could explain the observations," VanDoorsselaere told SPACE.com. "I would have wished the otherauthors were right because it would have been good news to finally solve theproblem."

The new study was published March6, 2008, in the Astrophysical Journal Letters.

"They're not convinced that we are right, but they areconvinced that our opinion should be published and discussed," he said."Probably at upcoming conferences, there will be some lively discussion ofthis."

The sun is not alone in having an inexplicably scorchingouter layer.

"We think our sun is pretty typical for coronabehavior," Van Doorsselaere said. "There are other stars with evenbigger and more active coronas."

Our sun, being so close to us, provides the best opportunityto study this phenomenon. Scientists still hold out hope we can get to thebottom of the mystery soon.

"To test this we need better observations," VanDoorsselaere said. "We're getting better telescopes and satellites to lookat the sun. There are several missions coming up to hopefully resolve theproblem."

He said NASA's upcoming Solar Dynamics Observatory, to belaunched sometime at the end of 2008 or beginning of 2009, or ESA's SolarOrbiter, set to launch in 2015, could be the keys to success.