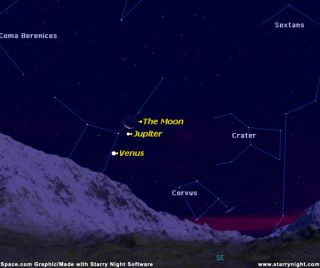 The Moon joins the planets on Nov. 9 in this view from mid-northern latitudes in the predawn.

Kenneth L. Franklin, the former Chairman and Chief Astronomer at New York's Hayden Planetarium, would often make reference to our "dynamic and ever-changing sky." His description certainly fits our current morning sky, as we now have a celestial summit meeting in the eastern twilight.

For the past several months, dazzling Venus has been prominent in the mornings. A few weeks ago, brilliant Jupiter also began to emerge from out of the dawn twilight.

These two planets had a spectacular rendezvous on Nov. 4. Now, as they begin to slowly separate, a rather dim Mars, which from our point of view has been on sabbatical since the start of the summer, hidden within the glare of the Sun, began to reappear during this past week, very low near the east-southeast horizon. And not far from Mars, glows the bluish-white, first-magnitude star, Spica.

Lastly, there's the Moon. At last quarter (half) phase on Nov. 5, it stands alone, high toward the South at sunrise.

But with each passing morning, as it wanes to a slender crescent, the Moon shifts toward the East, ultimately into the same region of the sky as our three planets. During this week, each dawn will offer a different perspective of this unusual gathering of the Moon, three planets and a bright star.

Early on Tuesday morning, Nov. 9, the show will reach its peak, when about 45 minutes before sunrise, Venus, Jupiter and the Moon - the three brightest objects of the night sky - form a stretched-out triangle. The Moon will appear closely above Jupiter. Meanwhile, Spica and Mars will lie well below the Moon, appearing just above the horizon.

Like a painting, this celestial tableau might at first glance may appear rather flat and one-dimensional. But by gazing at this scene long enough, our minds can perhaps picture these objects strung out across the solar system, along our line of sight as they really are.

Beyond our Moon (figuratively a stone's throw away at 236,000 miles away) we first reach Venus, about 500 times farther out, or 120 million miles from Earth. The lesser gem flanking Venus - Jupiter, largest of all the planets - is nearly 5 times more distant than Venus and 576 million miles from us.

Far below and much closer to the east-southeast horizon is Mars, currently almost twice as distant from the Earth as Venus at 235 million miles. Indescribably more remote is Spica at 262 light-years way. Consider this: the light we see this month left the star more than three decades before the United States was founded.

Venus is brilliant as always, shines about eight times brighter than Jupiter.

Venus rises an hour or so before dawn breaks, and about 50 minutes before sunrise during most of November, it blazes at least 20 degrees up in the east-southeast. Your fist on an outstretched arm covers roughly 10 degrees of sky.

Venus is now several months past greatest elongation, the location farthest from the Sun as seen from Earth, and is retreating around the far side of the Sun, so a telescope will show it gibbous and small. Yes, Venus goes through phases, somewhat like our Moon.

Although by far the brightest planet once it gets clear of the horizon hazes, Venus is not as showy as it was late last summer when it appeared higher and brighter. Naked-eye observers will enjoy watching Venus go by Spica during midmonth; passing 4? north of that star on Nov. 16.

Mars moves from the constellation Virgo into Libra by Nov. 22. It rises out of the east-southeast just after 5 a.m. local time on Nov. 1 and only about 15 minutes earlier by the end of the month. At magnitude +1.7, Mars is still a relatively inconspicuous object. Larger numbers on this scale denote dimmer objects, with the brightest objects achieving negative magnitudes.

The delicately thin crescent Moon will hover well above and to the right of Mars on the morning of Nov. 10. Spica will lie below the Moon. On the following morning, the Moon will appear as a razor-thin arc of light, just 3% illuminated, when it will be positioned well below and slightly to the left of Mars.

Jupiter in Virgo, rises in the east around 3:45 a.m. local time at the beginning of November; 2:20 a.m. by month's end. At dawn Jupiter is well up in the southeast.

As noted above, Venus, Jupiter and the Moon will make for a striking predawn sight on Nov. 9. Even more interesting: After sunrise that day the Moon will actually occult (hide) Jupiter as seen from much of central and eastern Canada, as well as parts of the Great Lakes and the Northeast United States.

Next month, the Moon will again pass in front of Jupiter, but before sunrise (in a dark sky) and visible over much of eastern and central North America; a truly spectacular sight!