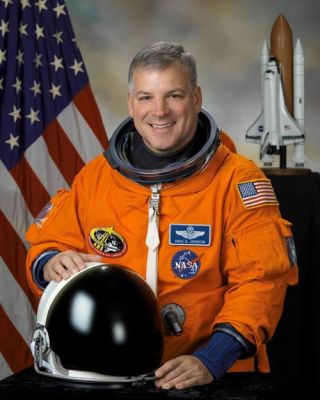 MILITARY EXPERIENCE: Johnson received his commission from the United States Air Force Academy in May 1984 and was designated an Air Force pilot in May 1986 at Reese Air Force Base, Texas. He was retained as a T-38A instructor pilot at Reese until 1989, when he was selected for an F-15E Eagle assignment. After completing initial F-15E training, Johnson was assigned to the 335th Fighter Squadron, at Seymour Johnson Air Force Base, North Carolina. In December 1990, Johnson deployed to Al Kharj, Saudi Arabia, flying 34 combat missions in support of Operation Desert Storm. In December 1992, he was again deployed to Saudi Arabia for three months, flying an additional 27 combat missions in support of Operation Southern Watch. In 1993, he was selected for Air Force Test Pilot School at Edwards Air Force Base, California, graduating in December 1994. After graduation, he was assigned to the 445th Flight Test Squadron at Edwards, where he flew and tested F-15C/E, NF-15B, and T-38A/B aircraft. In August 1997, he was assigned to Maxwell Air Force Base, Alabama, to attend Air Command and Staff College.

He has logged over 4,000 flight hours in more than 40 different aircraft.

NASA EXPERIENCE: Selected by NASA in June 1998, he reported for training in August 1998. He completed Astronaut Candidate Training in 2000. Following initial training and evaluation, astronaut candidates receive technical assignments within the Flight Crew Operations Directorate before being assigned to a space flight. In 2000, Johnson was assigned as a Technical Assistant to the Director, Flight Crew Operations Directorate (FCOD). In conjunction with that position, Johnson was assigned to the Shuttle Cockpit Avionics Upgrade (CAU) council – redesigning cockpit displays for future Space Shuttle missions. His design and evaluation work with CAU has continued to the present.

In 2001, Johnson was reassigned from FCOD to the Space Shuttle Branch, where he’s held various positions including direct support to the crews of STS-100 and STS-108, chief of shuttle abort planning and procedures for contingency scenarios, and ascent procedure development. He also was a key player on several “tiger teams” during the investigation into the cause of the Columbia accident in 2003. Johnson was the astronaut representative to the External Tank (ET) foam impact test team that eventually proved that ET foam debris on ascent could critically damage the shuttle’s leading edge thermal protection system. In 2004, Johnson was designated as the Deputy Chief of the Astronaut Safety Branch, focusing on all aspects of Space Shuttle, ISS, and T-38 safety, with special emphasis on improving specific operational procedures and techniques to make astronauts safer in all three vehicles. In 2005, Johnson was appointed as a crew representative supporting the design and testing of NASA’s newest spacecraft, the Crew Exploration Vehicle. Johnson is assigned as pilot on the STS-123 mission that will deliver the Japanese Logistics Module and the Canadian Special Purpose Dexterous Manipulator to the International Space Station.