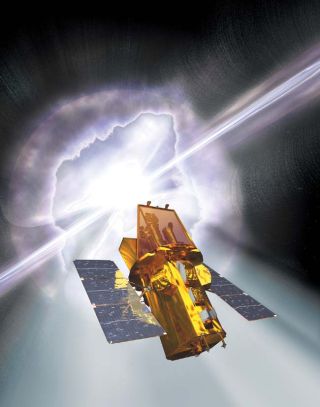 An artist's interpretation of the Swift spacecraft in flight, with a gamma-ray burst exploding behind it. The Swift space observatory is set to launch in November 2004.
(Image: © NASA/GSFC/Spectrum Astro. Click top enlarge.)

A new space observatory is preparing for a mid-November spaceflight despite setbacks caused by hurricanes that washed across its Florida launch pad.

NASA's Swift spacecraft, an orbital observatory that will scan the sky for the gamma ray-bursts (GRBs), the most powerful explosions in the universe, is spending its final weeks on Earth though NASA officials have not released a final launch target for the spacecraft.

According to current NASA launch schedules, the soonest Swift could launch from Florida's Kennedy Space Center (KSC) would be Nov. 17, but that date has yet to be finalized. NASA officials said today they anticipate an official launch target to be announced later this week.

Swift is expected to ride a Boeing-built Delta 2 rocket into space and orbit the Earth at an altitude of about 375 miles (603 kilometers). Once in space, the $239-million Swift spacecraft - a collaboration of NASA researchers and scientists in the U.S., United Kingdom and Italy - will continuously scan one-sixth of the night sky for GRBs, which flash for just a few seconds before sliding into an afterglow of X-ray, ultraviolet and visible light.

Tucked aboard Swift are three telescopes; a wide-view Burst Alert Telescope (BAT) to make the initial gamma-ray burst detection, as well as an X-ray telescope and ultraviolet-optical instrument for follow-up observations. The spacecraft is designed to detect a GRB and within a minute point itself at the event for quick observations. Researchers hope the spacecraft will detect about 150 such explosions during its two-primary mission.

"There were a lot of challenges to construct this mission within the constraints we had to work with," said Anne Kinney, NASA's universe division director, during a Nov. 1 prelaunch mission briefing at the space agency's Washington, D.C. headquarters.

Hurricanes, it seems, were among them.

While spacecraft engineers prepared Swift for launch in September at KSC, a series of hurricanes battered the spaceport along with much of Florida. Hurricanes Ivan, Frances and Charley hit the southern state during August and September of 2004.

To safeguard the observatory from damage, spacecraft handlers repacked Swift into its shipping container during Hurricane Frances, researchers said.

"It was a hard decision to do that since it cost us an extra week or two on the launch schedule, but the risk was so high and the satellite so valuable it was warranted," Gehrels said. "There were times that we thought the observatory was going to be destroyed...but Swift was not hurt at all."