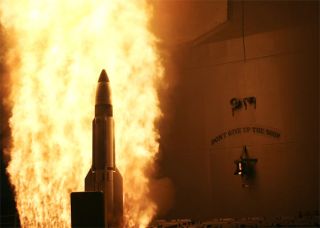 The USS Lake Erie launches a Standard Missile-3 at a non-functioning National Reconnaissance Office satellite as it traveled in space at more than 17,000 mph over the Pacific Ocean on Feb. 20, 2008.
(Image: © Defense Dept. photo by U.S. Navy)

The U.S. Navy's successfulmissile hit and apparent destruction of a defunct spy satellite represents amajor step forward in the space arms race in the eyes of some analysts. Othersare not so sure.

One expert said last night'shit was not an example of a real missile-defense system, targeting an unusuallylow satellite that was essentially a sitting duck with a missile that is notthe nation's top-of-the line for such tasks.

Some say tensions with Russia and China willincrease following the U.S. anti-satellite demonstration, as both nations hadstated their opposition to the attempt. Others argue the United Statestook necessary measures to ensure geopolitical stability and extend itsmilitary dominance.

"This is obviouslybeing hailed as a victory both politically, because the [U.S.]administration can claim there was no loss of life, and technically because itworked," said Theresa Hitchens, Center for Defense Information director."It helped the [U.S.] Navy demonstrate the capabilities of its missiledefense system."

Theexercise has severe implications, experts say, as it opens up a once-virginterritory — space — for international weaponization. The potential for aspace arms race has some worried.?

"Itwas an unfortunate choice by the United States that seems to have beenunnecessary. The fact is that satellites fall from space all the time and therisk of it was fairly minimal," said Stephen Young, the senior analyst inWashington, D.C., for the Union of Concerned Scientist's Global Security Program."But the implications of the satellite shootdown could be very severe.We're talking about a potential arms race in space."

"It'sa step backward in terms of weaponization of space because whatever the U.S.government's official stance is, the world perception is that this was an ASATtest," said Phil Smith, assistant director for Research and Planning forthe Secure World Foundation. "Perception is everything as they say inpolitics. It's perceived not only in that way but that the U.S. is beingsomewhat hypocritical when it condemned the Chinese launch and of course theywent ahead and did something that is going to be perceived as being just aboutthe same."

China has already demonstratedits anti-satellite capabilities, with Russia indicating ASAT abilities in the 1980s. "The U.S. will bein a worse position overall if other countries decide they also need theability to shoot down satellites," Young said.

Experts have also suggestedthe U.S. attempt could legitimizeChina's anti-satellite demonstration that took place a year ago, and openthe doors for other nations such as India or Iran to do their own tests.

"Since China didtheir ASAT [anti-satellite] test and got into political hot water, there's beendebate in China about whether to go forward," Hitchens said."This would seem to give PLA [People's Liberation Army] hardliners moreammunition for their argument, and also gives other nations the signal thatit's okay if you test this technology if it's done safely."

Another expert saw China'sinternal debate differently, even as China asked for more information about the U.S. satelliteshootdown.

"Their concern is notwhether they should continue with their military space program," saidEverett Dolman, a professor of comparative military studies at Maxwell Air ForceBase.

Dolman added that much ofthe international outcry over China's test was over the large debris field left in orbitby the Chinese satellite's destruction, and so the Chinese were likelydiscussing how to prevent such international condemnation in future tests. Hesees the continuing weaponization of space as almost a certainty, particularlyas the U.S. and China continue jockeying to maintain and increase theirglobal power.

Regardless of differences inopinion, most agreed that the U.S. anti-satellite demonstration sends a politicalmessage for China and Russia.

"[The U.S.] certainlydid a good job in couching it in safety terms, which makes it harder to attackoutright," Young said, "but it seems fairly clear that the Chineseand the Russians got the message: 'This is something we can do.'"

At least one expert saw the demonstration as a crucial step by theU.S. to ensure its military and political dominance if a space arms racebecomes inevitable.

"This was in my view avery positive move by the U.S. for stability," said Dolman. "The factthat you're using a Navy ship and a fairly standard weapon to do this is reallyratcheting up the technology curve."

The shootdown certainlyseems to confirmU.S. technological prowess. The interceptor missile "was never designedto engage a satellite," according to Raytheon Missile Systems, adding thatits success "demonstrates the capability of the SM-3 missile to meet aunique situation and perform beyond its intended purpose."

Dolman observed that the U.S., China and Russia willall try to control space in the near-future, but that developing anti-satelliteand other weapons won't necessarily lead to a catastrophic war because of therelatively bloodless nature of space conflict.

"No one's ready forcontrol of space yet, although they'd all like to have that capability,"Dolman said.

TheSecure World Foundation views theshootdown as an opportunity for the U.S. government to spearhead efforts for an internationalforum dealing with space-traffic management and weaponization issues.

"Weneed to deal with this globally, because that satellite could've been adifferent satellite, for example, belonging to a different country," Smithsaid. "If it was characterized as a threat and we had the ability to shootit down and nobody else did then that becomes an international issue that needsto be dealt with as transparently as possible."

Butso far, the U.S. government has come up a bit short on transparencyand international cooperation.

"Onefundamental truth is that this administration has demonstrated clearly apreference for unilateral and military action over international andcooperative actions," Young said. "We don't know how the decision wasmade in the Bush administration but the fact that early on they were talkingabout fairly modest risk and then suddenly 'we're going to shoot it down' ...there was no indication at all that they were headed that way. It seems to theoutside observer, hey this would be fun. Let's go shoot something down."

John Pike, a  militaryand security analyst who runs the highly regarded website Global Security.org,believes the shootdown has no implications regarding the space arms race.

"Inmy view it means nothing," Pike said. "it has no largerimplications."

Pike'srationale is that the U.S. has demonstratedits anti-satellite capabilities beginning in about 1985 and the missileused in the shot last night doesn't have the ability for a real missile-defensesystem.

"TheUnited States has got other better ways of shooting downsatellites. This is not a very good ASAT interceptor," Pike told SPACE.com.The missile reached about 150 miles (241 km). "No self-respectingsatellite is ever going to find itself that low, because you're not going tostay in orbit that long. Typically, satellites reside at an altitude of about300 - 400 miles (483 ? 644 km) in order to remain in orbit without extraboosts.

Inaddition, officials have said the resulting debrisfrom the obliterated satellite appears to be too small to cause any damage onEarth. The destroyed satellite's debris was spotted in the sky by some WestCoast observers.