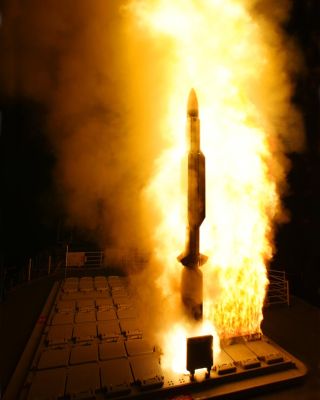 A Standard Missile-3 (SM-3) is launched from the Pearl Harbor-based Aegis cruiser, USS Lake Erie (CG 70) on November 6, 2007 enroute to an intercept as part of a Missile Defense Agency test. A similar missile will be used to shoot down a crippled spy satellite in coming weeks.
(Image: © U.S. Navy.)

The U.S. Navy successfully blasted a wayward satellite with a heat-seeking missile over the Pacific Ocean Wednesday evening, defense officials announced in a press release.

According to the report, the bus-sized spacecraft ? an old spy satellite ? was targeted 133 nautical miles(210 kilometers) above the Earth with a modified tactical Standard Missile-3 (SM-3).

The incident occured at approximately 10:26 p.m. EST Wednesday when a U.S. Navy AEGIS warship, the USS Lake Erie, launched the missile. The satellite was intercepted over the Pacific Ocean as it traveled at more than 17,000 mph.

The satellite USA-193, also known as NROL-21, was launched into orbit Dec. 14, 2006. Shortly after it reached orbit, ground controllers lost contact with it. Though the satellite's objective is secret, many figure it is a high-resolution radar satellite intended to produce images for the National Reconnaissance Office (NRO).

The Pentagon submitted orders to shootdown the spacecraft because they said its fuel tank could surviveatmospheric reentry and spew 1,000 pounds (454 kilograms) of toxic hydrazinegas over an area about the size of two football fields.

"Even if they hit it, there's just a 30 percent chance that theshrapnel connected by the intersection hits the hydrazine tank," saidGeoffrey Forden, an MIT physicist and space expert, earlier this week.

The initial view of missile strike indicates it probably did hit thespacecraft's fuel tank, a defense official said, but whether or not the threatwas completely eliminated is unknown at this time.

If the tank survives atmospheric reentry, Forden calculated the risks of itkilling or injuring someone at 3.5 percent. But he said the political consequencesof the attempted shoot-down could be worse by further opening up the internationalarena for future anti-satellite tests and possible spaceconflicts.