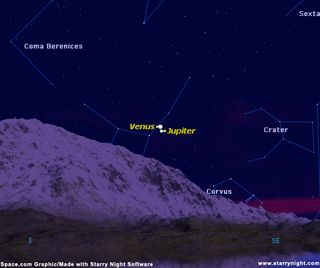 SKY MAP: The planets on Nov. 4 from mid-northern latitudes in the predawn.

The first week of November will be an exceptional time for predawn skywatchers with a beautiful gathering of the two brightest planets, and the waning crescent Moon will later drop by to join them.

Venus and Jupiter will appear closest together on the mornings of Nov. 4 and 5.

The moment of closest approach will actually come during the early evening hours of Nov. 4, unfortunately when this dynamic duo is below the horizon for North America. They'll be separated by just over ?-degree, roughly the apparent width of the Moon (the width of your fist, held at arm's length roughly corresponds to 10 degrees).

Generally speaking, at least for the immediate future, conjunctions between Venus and Jupiter will come in pairs. The first conjunction takes place in the morning sky, usually followed about 10 months later by another in the evening sky.

Then 2? years later, Venus and Jupiter are again in conjunction, again in the morning sky.

When Venus and Jupiter next get together, it will be in the evening sky late next summer, at the beginning of the Labor Day holiday weekend.

The table below shows future Venus-Jupiter pairings in the coming decade.