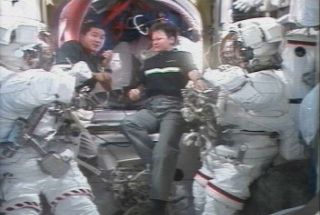 Astronauts aboard the International Space Station (ISS) are preparingfor a Wednesday spacewalk to restore some of the power-generating ability ofthe orbiting laboratory?s expansive solar wings.

ISS Expedition 16 commanderPeggy Whitson and flight engineer Dan Tani will replace a broken jointmotor at the base of the station?s two starboard solar wings during a plannedsix-hour spacewalk.

The solar wing has been unableto track the sun continuously since early December, when the joint motorsuffered a series of electrical shorts. Without the repair, the space station willhave enough power to make it through at least the next shuttle mission - targetedfor a Feb. 7 launch - but not much further said Kirk Shireman, NASA?s ISS deputyprogram manager.

If the Wednesday spacewalk is successful, the ISS will havepower to last through the planned arrival of a massive Japanese laboratory inApril and into the summer, he added.

The broken motor controls a beta gimbal joint that pivotsone of the station's two starboard solar wings to face the sun. After the motorexperienced electrical failures in December, Whitson and Tani made a spacewalkto inspect the joint and found no outward signs of damage. NASA hopes replacingthe whole motor, a garbage-can sized device that weighs about 250 pounds (113kilograms), with a backup will fix the problem.

For safety reasons, the astronauts can only work duringeclipses, when the sun is blocked by the earth. If the sun was shining on thesolar panels while Whitson and Tani were working on the joint, they would be atrisk of shocks due to the high power levels surging through the arrays.

"We have to be very conscientious when we're openingconnections that will expose us to that power," said Tani, adding that heand Whitson must also take special care since they will be working with latchesthat physically connect the solar wing to the ISS. ?That is probably thebiggest danger of this [spacewalk].?

Once they begin working, the astronauts will have 33 minutesof complete shade at a time. If they can't replace the motor during oneeclipse, they'll have to wait till the next one. The space station orbits theEarth about once every 90 minutes to make a single circuit above the planet?sday and night sides.

"They will be in a little bit of a timeline crunch whenthey're performing activities during the eclipse," said astronaut ThomasMarshburn, who has rehearsed the repair in a giant NASA swimming pool used forspacewalk training. "We found that it is very doable to get all thisdone."

The space station is currently afflicted by two unrelated powersystem glitches with its starboard solar arrays. In addition to the broken jointmotor, known as a Bearing Motor Roll Ring Module, the orbital lab is alsosuffering from damage to a massive gear designed to rotate the station?sstarboard solar arrays like a paddlewheel to track the sun.

Astronauts discoveredmetal grit from the gear?s attached metal ring during past spacewalks.Whitson and Tani will take another look at the 10-foot (3-meter) wide gear ifthey have extra time during Wednesday?s excursion, mission managers said.

Space station managers are still discussing when to repairthe larger gear, called a Solar Alpha Rotary Joint, later this year, though anyeffort will likely require a series of spacewalks.

Wednesday?s excusion will mark the sixth career spacewalk forboth Whitson and Tani, and the fifth for the station?s Expedition 16 crew.

"Any opportunity to go outside is a very specialevent," Whitson said. "The huge structure that we've built up thereis just amazing to see. In its own way it's just as beautiful as looking atEarth."