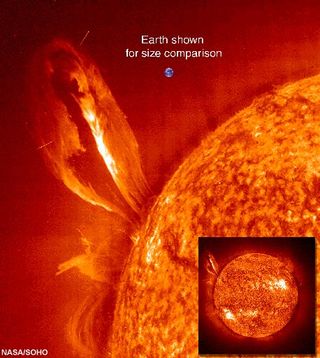 Looping eruptions on the Sun, like this one on July 24, 1999, create antimatter. Earth is shown for size comparison.

Antimatter,which annihilates matter upon contact, seems to be rare in the universe. Still,for decades, scientists had clues that a vast cloud of antimatter lurked inspace, but they did not know where it came from.

Themysterious source of this antimatter has now been discovered — stars getting rippedapart by neutron stars and blackholes.

Whileantimatter propulsion systems are so far the stuff of science fiction,antimatter is very real.

Allelementary particles, such as protons and electrons, have antimattercounterparts with the same mass but the opposite charge. For instance, theantimatter opposite of an electron, known as a positron, is positively charged.

Whena particle meets its antiparticle, they destroy each other, releasing a burstof energy such as gammarays. In 1978, gamma ray detectors flown on balloons detected a type of gammaray emerging from space that is known to be emitted when electrons collide withpositrons — meaning there was antimatter in space.

"Itwas quite a surprise back then to discover part of the universe was made ofantimatter," researcher Gerry Skinner, an astrophysicist at Goddard SpaceFlight Center in Greenbelt, Md., told SPACE.com.

Thesegamma rays apparently came from a cloud of antimatter roughly 10,000 light-yearsacross surrounding our galaxy's core. This giant cloud shines brightly withgamma rays, with about the energy of 10,000 suns.

Whatexactly generated the antimatter was a mystery for the following decades.Suspects have included everything from exploding stars to darkmatter.

Theresearchers calculate that a relatively ordinary star getting torn apart by ablack hole or neutron starorbiting around it — a so-called "low mass X-ray binary" — could spewon the order of one hundred thousand billion billion billion billion positrons(a 1 followed by 41 zeroes) per second. These could account for a great deal ofthe antimatter that scientists have inferred, reducing or potentiallyeliminating the need for exotic explanations such as ones involving darkmatter.

"Simpleestimates suggest that about half and possibly all the antimatter is comingfrom X-ray binaries," said researcher Georg Weidenspointner of the MaxPlanck Institute for Extraterrestrial Physics in Germany.

Nowthat they have witnessed the death of antimatter, the scientists hope to see itsbirth.

"Itwould be interesting if black holes produced more matter than neutron stars, orvice versa, although it's too early to say one way or the other rightnow," Skinner explained. "It can be surprisingly hard to tell thedifference between an X-ray binaries that hold black holes and neutronstars."

Weidenspointner,Skinner and their colleagues, detailed their findings in the Jan. 10 issue ofthe journal Nature.