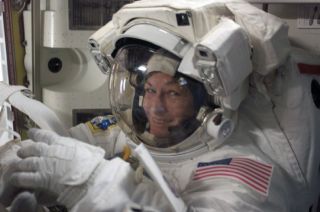 NASA astronaut Peggy Whitson, Expedition 16 commander at the International Space Station, poses for a photograph while clad in a NASA spacesuit.
(Image: © NASA.)

Astronautsaboard the International Space Station (ISS) will step outside their spacecraftearly Tuesday to inspect a pair of critical joints serving the orbital lab'sstarboard solar wings.

Station commanderPeggy Whitson and flight engineer Dan Tani are due to begin the fourthspacewalk of their Expedition 16 mission no later than 6:00 a.m. EST (1100 GMT)to take an in-depth look at a large gear contaminated by metallic grit and alocked solar wing joint.

"Whatwe're providing is additional data," Whitson told reporters last week,adding that engineers on Earth will use tomorrow's inspections to draw up possiblerepair plans.

The twojoints, each on a different axis, are designed to rotate the station'swing-like solar panels to continuously face the sun and maximize energyproduction.

During alate October spacewalk, Tani discovereddamage and metal shavings inside the station's starboard Solar Alpha RotaryJoint (SARJ), a massive, 10-foot (3-meter) wide gear that turns the station'soutboard starboard solar arrays like a paddlewheel. Engineers will useTuesday's inspection to help decide whether the joint can be cleaned byspacewalking astronauts or will require a complicated repair over multiplespacewalks.

"We'restill in the throes of understanding what happened and how to moveforward," said Kirk Shireman, NASA's deputy ISS program manager, in amission briefing.

Anotherjoint, a Beta Gimbal Assembly used to pivot an individual solar wing from sideto side, was locked in place earlier this month after twopower feeds dropped out, possibly due to damage from a micrometeorite,mission managers said.

"We'lltry and figure out what's going on there as well," Whitson said.

Tuesday'sspacewalk will mark the fourth for the Expedition 16 crew and the 100thdedicated to space station construction. The astronauts were scheduled to begincamping out inside the station's Quest airlock at 2:50 p.m. EST (1950 GMT) to prepare their bodies to work in the 100 percent oxygen environment oftheir NASA-issue spacesuits.

Whitson andTani will make a systematic inspection of the space station's starboard SARJ jointin hopes of finding the source of damage to the mechanism's large metal ring.

They willremove and peer under as many of the joint's 22 protective covers and retrieveone of 12 bearings that will be returned to Earth for study.

"Theground has data that suggests that maybe that's where the problem is,"Whitson said of the bearing, known as Trundle Bearing 5. "But if we canvisibly tell that it is a different one, we'll bring in the one we think is atroublemaker."

Whitsonsaid that, at face value, staging a series of spacewalks to repair the SARJjoint by switching it to a backup ring appears simpler than a full-scale cleanup operation, but Tuesday's inspection will help engineers decide what futuresteps to take.

Missionmanagers initially scheduled the joint inspection as an extra excursion duringNASA's planned STS-122shuttle mission to deliver the European-built Columbus laboratory to theISS earlier this month. But the spaceflight's delay to noearlier than Jan. 10 allowed its addition to the Expedition 16 mission.

"Wewere pretty set for this [spacewalk] in terms of tools and spacesuitconfiguration," Tani said of the upcoming extravehicular activity (EVA)."I don't think we're going to be losing any planned work for thisEVA."