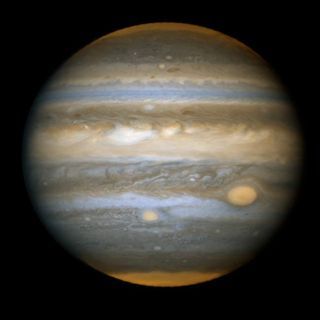 Scientists now think that if Jupiter, a gas giant in our solar system, were 35 times closer to the Sun, its atmosphere would boil away.
(Image: © NASA/Johns Hopkins University Applied Physics Laboratory/Southwest Research Institute)

Theoristshave what they think is a good handle on how rocky planets like Earth form.Leftovers of star formation collide, stick together and eventually form a ballof rock.

However, theformation of gas giant planets is more mysterious. For starters, so many gasgiants beyond our solar system have been found improbably close to their hoststars—in some cases with blistering effects and an unsustainable outflow ofmaterial—that researchers figure they probably formed farther out and then migratedinward.

Such ascheme would have huge implications for the development of any planetarysystem, as a migrating giant (like Jupiter or even more massive) would tend togobble up aspiring Earths on the way in. And what's to stop the migratingworlds from getting too close and vaporizing altogether?

Among manyquestions about all this, one has just been answered: How close can a giantplanet get to a star before its atmosphere becomes unstable and the planet isdoomed to catastrophe?

The studyinvolved comparing Jupiter to other giant exoplanets.

?We knowthat Jupiter has a thin, stable atmosphere and orbits the sun at 5 AstronomicalUnits (AU)—or five times the distance between the sun and the Earth,"explained UCL's Tommi Koskinen. "In contrast, we also know that closelyorbiting exoplanets like HD209458b—whichorbits about 100 times closer to its sun than Jupiter does—has a very expandedatmosphere which is boilingoff into space. Our team wanted to find out at what point this change takesplace, and how it happens."

SoKoskinen's team brought a virtual Jupiter closer and closer to the sun.

?If youbrought Jupiter inside the Earth's orbit, to 0.16AU, it would remainJupiter-like, with a stable atmosphere," Koskinen said. "But if youbrought it just a little bit closer to the sun, to 0.14AU, its atmosphere wouldsuddenly start to expand, become unstable and escape."

Equallyimportant in the research is what causes the sudden catastrophic loss of air.

A giantplanet is cooled by its own winds blowing around the planet. This helps keepthe atmosphere stable. Another cool effect: An electrically-charged form ofhydrogen called H3+ reflects solar radiation back to space. As the virtualJupiter was brought closer to the sun, more H3+ was produced, bolstering thiscooling mechanism.

?We foundthat 0.15AU is the significant point of no return," said study co-authorAlan Aylward. "If you take a planet even slightly beyond this, molecularhydrogen becomes unstable and no more H3+ is produced. The self-regulating,?thermostatic? effect then disintegrates and the atmosphere begins to heat upuncontrollably.?

?This givesus an insight to the evolution of giant planets, which typically form as an icecore out in the cold depths of space before migrating in towards their hoststar over a period of several million years," said Aylward and Koskinen's colleagueSteve Miller. "Now we know that at some point they all probably cross thispoint of no return and undergo a catastrophic breakdown.