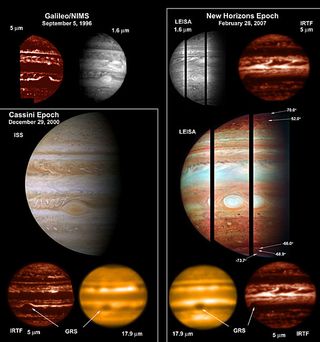 Jupiter'satmosphere froths with violent winds and mega-storms as large as the entireEarth, but a recent spacecraft flyby captured the planet in an "unusuallycalm period," astronomers said. Calm on Jupiter, however, still makesterrestrial hurricanes look like breezes.

The NewHorizons spacecraft, bound for Pluto on a nine-year journey, caught Jupiteroff-guard in February 2007 and allowed astronomers to gather hordes of newinformation about theJovian giant.

"Jupiterchanged its attitude right before the flyby," said Kevin Baines, anastronomer at NASA's Jet Propulsion Laboratory in Pasadena, Calif. "Everyother time we've looked at the planet with the Voyager, Galileo and Cassini spacecraft, we've seen a verytraditional view of Jupiter."

Nineseparate studies on Jupiter, three of which detail some of this new informationabout the planet's atmospheric phenomena, will be published in the Oct. 12issue of the journal Science.

Jupiter'sequator is usually one of its most violent places, where clusters of massivestorms emerge just behind the planet's infamous Great Red Spot. During therecent flyby, however, the storms were diminished and a normally thick bandof cloud cover along the equator was thinned out.

The calmedJovian surface gave astronomers an unprecedented look at a strange band ofwave-rippled clouds near the surface.

"Thesewaves have been seen before, but we've never been able to measure theirspeed," said DennisReuter, a planetary scientist at NASA's Goddard Space Flight Center in Greenbelt, Md. "We got lucky this time and clearly saw a whole train of them."

"That'sabout a quarter of the speed of sound, which is pretty impressive," Reutertold SPACE.com. Category five hurricanes can'tgenerate such speed on Earth; only extreme tornadoes and mountain windgusts can compete.

Reuterthinks the rippling activity and ammonia plumes are driven by heat from deepbeneath the Jovian surface, which Baines said remains as one of the solarsystem's great mysteries.

"Thesun can't account for all of the heat we see coming from Jupiter," Bainessaid. "It's putting out about twice the energy that it should be."

To find outmore about Jupiter's mysterious inferno, Baines led a search for long-soughtlightning strikes at Jupiter'schilly poles. He found them.

"Thisis the first polar lightning we've ever seen on a non-terrestrial planet,"he said. "Other spacecraft that visited Jupiter never saw it."

Some of thelightning strikes seen during the New Horizons flyby were about 10 times moreenergetic than Earth's strongest bolts and occurred about 50 miles (80kilometers) below Jupiter's surface. Baines thinks that hot gases-includingwater vapor-are rising from deep within the planet to cause the lightning.

"OnEarth we see most lightning near the equator, where warm moist air is rising upabove colder, denser air," he said. "We now know that Jupiter'slightning occurs all over the planet, so some uniform internal heat source hasto be driving the activity."

Baines saidthe finding is a relief for scientists trying to get to the bottom of Jupiter'sheat source because the sun, about 484 million miles (779 million kilometers)away, can only do so much. So far, the leading theory is that the planet's crushing mass generates its warmth.

Anotherstudy led by Randy Gladstone, a planetary scientist at the Southwest ResearchInstitute in San Antonio, focused on night-side observations of Jupiter toinvestigate its bright auroras and eerie "airglow."

Likeauroras abovethe Earth's arctic regions, auroras above Jupiter's north pole are causedby magnetic fields slamming charged particles—from the sun or the magnetosphere—into the planet'satmosphere. Gas molecules ionized by the sun's rays, however, lead toairglow often seen high above the Jovian surface as well as above tropicalregions on Earth.

"I washoping to map out these bright emissions on Jupiter's night side, but we hardlysaw any activity," Gladstone said, noting that Voyager observed the faintglow during its visit more than 25 years ago. Why the airglow wasn't detectedon Jupiter's dark side continues to puzzle Gladstone and his team.

"We'resure New Horizon's instruments were functioning correctly, so Jupiterwas probably acting up when we observed it," he said.

Baines saidthat while New Horizons has deepened some Jovian puzzles, such as the lack ofnight side airglow seen on the planet's night side, he noted that the flyby datawill provide "calm" examples to compare to Jupiter's typicalconditions.

"Weobserved the planet during its calmest period ever recorded," Baines said,noting such an event might happen only a few months every 40 years or so."This gives us a baseline to compare to data in the future."

Baines, whowas at the American Astronomical Society Division for Planetary Sciencesmeeting in Orlando, Fla., told SPACE.com that the calm period mayalready be over, as astronomers at the meeting recently reported observing Jupiter returningto normal.

"Jupiterhas apparently stopped being calm and is back on track to being itsusual, violent self," he said.