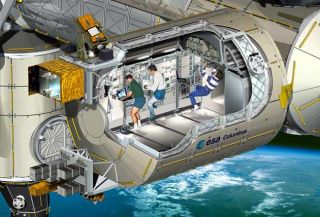 An artist's impression of Columbus, a cutaway view, the European laboratory module of the International Space Station. Credits: ESA - D.Ducros

Ifastronauts onboard the International Space Station (ISS) run afoul of the law morethan 200 miles (321 kilometers) above Earth, their fate usually depends on wherein the orbital lab the incident occurred.

The spacestation currently exists as a legal patchwork of about 16 sovereign territories– modules and hardware belonging to the United States, Russia, Canada, Europeand Japan – joined together to form one orbital research platform. Each nationhas legal authority over its part of the space station, as stated in the OuterSpace Treaty of 1967. But no single European nation's law will hold sway overthe ESA'sColumbus laboratory module, which is slated to launch into orbit aboard thespaceshuttle Atlantis Dec. 6, and there is no one overarching European law.

However, astronautlawbreakers won't languish in limbo. Earlier this year, European legal expertsagreed on a set of legal rules for Columbus during an conference entitled "Humans in Outer Space – Interdisciplinary Odysseys."

"Theydecided that if somebody performs an activity which may be considered criminal,it is in the first instance his own country which is able to exercisejurisdiction," saidFrans von der Dunk, of the International Institute of Air and Space Law at the University of Leiden, in a written statement.

Althoughastronauts are an exceptionally well-behaved group, other legal concerns mayarise. An invention created by an enterprising astronaut on ISS will bepatented in the nation that has jurisdiction over the module where work tookplace, not the nation of the inventor. Innovators onboard Columbus will have a choice of patentingtheir work in either Germany or Italy – although European patent agreements make this distinctionless important.

Civilliability on the space station is another issue. If someone on Earth gets hitby a car, they can sue the offending driver. If astronauts accidentally damage equipmentin Columbus while doing their usual duties onthe space station, they typically don't have to fear a lawsuit.

"Weare all there together, we all have the same purpose to make the ISS into a bigsuccess and we don't want that attitude, that mentality, to be disturbed by thethreat of one party suing the other," von der Dunk said.

The ESAdecision follows a previous cross-waiver agreement that the spirit ofinternational cooperation is more important than minor legal squabbling. When asolararray on the space station ripped during space shuttle Discovery's missionin October, the involved astronauts and agencies simply planned and executed arepair job instead of pointing fingers.

But"there are a number of exceptions" to the cross-waiver for civilliability, noted Andre Farand, a senior administrator in ESA's legal department,in an e-mail interview. For instance, injury or death suffered byindividual astronauts could still lead to legal claims against the organizationwhich caused the harm.

What murkyareas remain in space law may come from the growing presence of privateinterests, whether through space tourism or even astronauts participating in commercialactivities on ISS, said Farand. For the few space tourists who have visitedISS, Russia proposed the legal rules that otherISS partners then reviewed and agreed on, according to NASA's legal department.