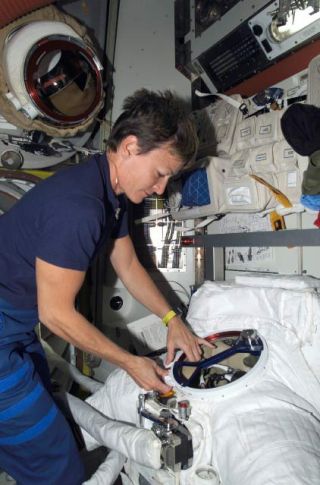 NASA temporarilysuspended U.S. spacewalks earlier this week after an astronaut smelledsmoke inside a U.S. spacesuit - known as an ExtravehicularMobility Unit (EMU) - during a ground test at the agency's Johnson SpaceCenter (JSC) in Houston, Texas. The ban was largely a precaution in case theincident was due to a generic flaw in NASA spacesuits.

"They hadoverwhelming data that showed there was no evidence of a combustion event,"NASA spokesperson Lynette Madison, of JSC, told SPACE.com.

Whileengineers have not completely identified root cause of the Earth-based suit'ssmoky odor, the leading candidate is the specific canister used to sift carbondioxide from the EMU's 100 percent oxygen interior, she added.

Butengineers were able to clear the spacesuits to be used by Whitson and Taniduring their planned Nov. 20 and Nov. 24 spacewalks of any concerns.

"The EMUs have the go for spacewalk use," statedan ISS Expedition 16 status report issued today. Because of the high flammability ofa spacesuit's oxygen-rich atmosphere, NASA takes any hint of smoke orcombustion seriously to ensure the safety of spacewalking astronauts.

Whitson andTani recharged the water supplies for their EMUs while working aboard the spacestation earlier today. Two cooling system radiators were also deployed outsidethe ISS. The Expedition 16 crew plans to outfit the station's recently installedHarmony module with cooling and power lines during the upcoming spacewalks,which will cap a busy month of work tomove the school bus-sized connecting node to its final perch at thefront of the outpost's U.S. Destiny laboratory.

Madisonsaid NASA also approved plans today to go ahead with a series of spacewalks scheduledfor December's STS-122 shuttle mission to attach the European-built Columbuslaboratory to one of Harmony's multiple docking ports. The Italian-builtHarmony node is designed to serve as the anchor for European and Japaneselaboratories at the ISS.

A preliminarymeeting found the mission to be on track for its December launch earlier thisweek, with a final flight readiness review set for Nov. 30, NASA spokespersonKyle Herring said.