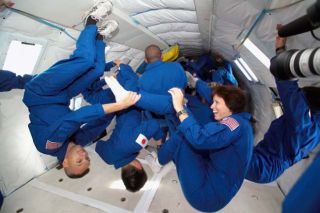 NASA's 2004 class of astronaut candidates and some JAXA astronauts tumble during one of a series of reduced gravity sessions provided by special parabolas flown by a KC-135 aircraft over the Gulf of Mexico. Randolph J. (Randy) Bresnik, pilot candidate, and Shannon Walker, mission specialist candidate, are in the foreground.

NASA's newest astronaut candidates experienced their first taste of zero gravity and arenow preparing to make their first jet flights without the company of instructors.

The 11members of 2004 astronaut class and three astronauts from the JapaneseAerospace Exploration Agency (JAXA) experienced small periods of weightlessness, aswell as lunar and Martian gravity, during an introductory flight aboard NASA'sKC-135 aircraft this month.

"Flying inthe KC-135 really gave us a small glimpse of what it's like flying in space,"said astronaut candidate Randy Bresnik, a MarineCorps major and pilot, during a telephone interview. "It's quite a euphoricfeeling, escaping gravity."

The flightmarked the culmination of several weeks of flight training, during which timethe Johnson Space Center-based class became qualified to fly theT-38 jetaircraft used by NASA to maintain aviation proficiency in astronauts.

"When yourflying in a jet aircraft, everything goes much faster," mission specialistcandidate Shannon Walker, a NASA astrophysicist who owns a private airplane,told SPACE.com.

Walker said the recent weightless flight was a welcome groupexperience for the astronaut class after weeks of one-on-one training with T-38instructors.

"It reallybrought us together as a class," she added.

Duringtheir two-hour flight, the astronaut class and Japanese astronauts experienced44 parabolas, 40 of which were true zero gravity arcs. The remaining fourparabolas were split in half, with two flown at Martian gravity (aboutone-third that of Earth) and the others at lunar gravity (one-sixth that ofEarth).

"It's goingto take a long time to wipe the smiles off our faces," Bresniksaid.

Up next forthe astronaut class is shuttle systems training to familiarize the candidateswith the intricacies of NASA's space shuttle fleet.

"It's goingto be months and months of training because of the complexity of the system," Bresnik said, adding that the time spent studying one systemof the space shuttle could equal the amount of time he's spent in groundtraining for an entire aircraft.

Thattraining is currently scheduled to run into December, the astronaut candidatessaid.

"I think itreally shows us the complexity of spaceflight," Walkersaid, adding that the joint shuttle-space station simulation showed that NASAis forging ahead with its return to flight operations. "There's always moretraining to do."