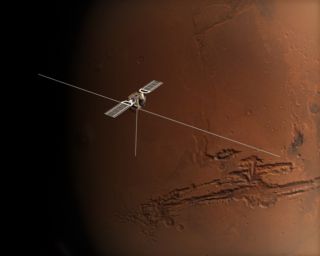 A Europeanspacecraft has used radar to probe one of the youngest and most mystifyingdeposits on Mars.

TheEuropean Space Agency's Mars Express orbiter studied the MedusaeFossae Formation (MFF), which straddles a divide between the highlands andlowlands near the Martian equator. MFF deposits have remained an enigma partlybecause they are "stealth" regions that give no radar echo fromcertain wavelengths of Earth-based radar.

But whilethe deposits absorb radar wavelengths between 1.4 and 5 inches (3.5 to 12.6centimeters), the MarsExpress used its Mars Advanced Radar for Subsurface and IonosphericSounding (MARSIS) that operates at wavelengths of 164 feet to 328 feet (50 toover 100 meters). That means MARSISradar waves can pass through the MFF deposits and bounce off the solid rockbeneath, creating a subsurface echo image.

?We didn?t knowjust how thick the MFF deposits really were,? said Thomas Watters, the study'slead author at the Center for Earth and Planetary Studies for the SmithsonianInstitution's National Air and Space Museum in Washington, D.C. "The newdata show that the MFF are massive deposits over 2.5 km [1.5 miles] thick insome places where MARSIS orbits pass over them."

Scientistshave proposed a variety of scenarios about the origin and composition of theMFF deposits. They could be volcanic ash deposits, wind-blown materials erodedfrom other Martian rocks, or even ice-rich deposits that formed when the spinaxis of the planet tilted over and made the equatorial region colder.

MARSISrevealed both the depth and electrical properties of the deposit layers,suggesting that the layers could be poorly packed, fluffy or dusty material.But scientists are puzzled over how material from wind-blown dust could bekilometers thick and not have compacted under the weight of overlying material.

Althoughthe electrical properties resemble those of water ice layers, there is no otherstrong evidence for ice remaining at the Mars equator. The water vapor pressureon Mars is so low that any ice near the surface would quickly evaporate,leaving the mystery of the Medusae Fossae Formation for scientists to ponder.

?If thereis water ice at the equator of Mars, it must be buried at least several metresbelow the surface,? said Jeffrey Plaut, MARSIS co-principal investigator atNASA's Jet Propulsion Laboratory in Pasadena, Calif. ?It is still early in thegame. We may get cleverer with our analysis and interpretation or we may onlyknow when we go there with a drill and see for ourselves."