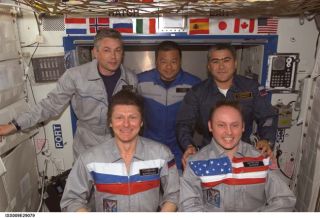 Two crews of astronauts and cosmonauts aboard the International Space Station (ISS) are hard at work preparing the orbital facility for its next six months of spaceflight.

"We've been soaking everything up in this week of transition,"Chiao said during an Oct. 20 news conference. "The station looks quite a bit different from the last time I was here."

Chiao, Sharipov and Shargin arrived at the station early Oct. 16, the first human visitors for Expedition 9 crew Gennady Padalka and Michael Fincke since they took over ISS operations in April. For Chiao, the ISS arrival occurred four years after he last visited the station during a construction mission.

"Withthe addition of the laboratory and docking compartments [since then], thestation is quite a bit bigger," Chiao said.

Padalka and Fincke have spent the last few days bringing the Expedition 10 crew up to speed on the space station's status.

"I'm focusing on sharing all of the stuff we've learned in the past six months," Fincke said of the handover period. ISS corridors are filling up with cargo slated to be returned to Earth via NASA's space shuttle- which is not expected to fly during Expedition 10's mission - but has not reached serious levels, he added.

While Shargin has been working through a full schedule of science experiments, the joint Expedition 9-Expedition 10 crew performed some final repairs on the space station's oxygen producing Elektron device using spare parts brought up by the Chiao and Sharipov.

"They made the repairs permanent," Fincke said of the procedures. "We're really confident the Elektron is going to be in great shape."

The primaryoxygen-generating device aboard the ISS, the Russian-built Elektron failed inearly September and was later restored to intermittent operation by theExpedition 9 crew.

In additionto the Elektron work, Chiao and Fincke began repairs on a U.S.-built spacesuitcooling system. The work follows repairs made by Fincke on another U.S.spacesuit in August, when he spent 4.5 hours replacing a cooling system rotorpump.

Afterformally handing over control of the ISS to Chiao and Sharipov, the Expedition9 crew and Shargin will return to Earth on Oct. 23 in their Soyuz TMA-4spacecraft.

"I got to see some video of my daughter," Fincke said of his new baby girl Tarali Paulina, who was born in June. "She can turn over now, she's getting really big without me."

Fincke saidhe, Padalka and Shargin expect to run through a simulation of undocking andreentry to prepare for their return.

"TheSoyuz is ready to go," he said, adding that he's eager to see his family."They're going to meet me in Russia."

In November, Chiao and Sharipov will move their Soyuz TMA-5 spacecraft from its current berth at the Pirs docking compartment to a docking port on the station's Zarya module. The move will free up the Pirs compartment for use during two upcoming spacewalks.