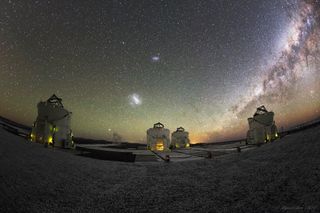 A view from the Very Large Telescope array in Chile shows four auxiliary telescopes under the Large and Small Magellanic clouds and the Milky Way.
(Image: © Miguel Claro)

Miguel Claro is a professional photographer, author and science communicator based in Lisbon, Portugal, who creates spectacular images of the night sky. As a European Southern Observatory photo ambassador, a member of The World At Night and the official astrophotographer of the Dark Sky Alqueva Reserve, he specializes in astronomical skyscapes that connect Earth and the night sky. Join Miguel here as he takes us through his photograph "Magellanic Clouds, Auxiliary Telescopes and the Milky Way."

Rising in the background and near the horizon is Canopus, the second-brightest star in the sky. Above it, we can easily spot the Large and Small Magellanic clouds, two small dwarf galaxies that orbit the Milky Way. On the right side of the image we can find the beautiful presence of the Milky Way galaxy, our cosmic home. The Milky Way's dusty core also peeks into view in the upper right corner. [Our Milky Way Galaxy's Core Revealed (Photos)]

According to ESO, the VLT is the world’s most advanced optical instrument. It consists of four unit telescopes with main mirrors that are 8.2 meters (27 feet) in diameter; these telescopes are generally used separately but can also work together to achieve very high angular resolution.

VLT's four optical telescopes are known as Antu, Kueyen, Melipal and Yepun, all named using words for astronomical objects in the Mapuche language. Each of these instruments contains optical elements that can combine all four into an astronomical interferometer, which is used to resolve small objects. The interferometer is complemented by four moveable, auxiliary telescopes of 1.8-m (8 feet) aperture.