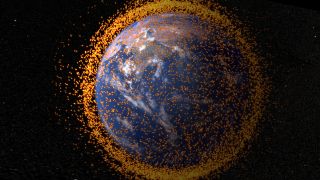 Earth is surrounded by a cloud of defunct satellites that can be hazardous to working spacecraft — but it doesn't have to be that way.
(Image: © NASA's Goddard Space Flight Center/JSC)

"Space is for everyone" is a popular saying, but it rarely holds true — partly because space is expensive, and partly because certain countries have decades of a head start and established procedures to rely on.

Rethinking those established procedures, however, could address not just inequity, but other looming challenges in space exploration as well. That's the argument that powers the research of Danielle Wood, who runs a program at MIT's Media Lab, which focuses on how to do things in space that further equity and justice on Earth.

"The way we operate in space, it matters to everyone on Earth," Wood said, and not always in a good way. "The historical fact is that space technology, it's a beautiful history of what happened in space, but also it has mixed roots." [Astronauts Snap Amazing Last Glances of Space Station For 20th Anniversary (Gallery)]

Much of that ambivalence stems from the space race, which played out against a geopolitical landscape of intense nationalism that used space as a power play — both through the hard power of aiding weapons research and the soft power of seeking to impress newly independent former colonies. America's early spaceflight work was also deeply rooted in military goals, and our first rockets were designed and built by engineers recruited from Nazi Germany after World War II.

While Wood appreciates the importance of physical security, she said it's past time to shift the goals of space so that projects align more closely with other values humans hold, like justice — which she defines as ensuring everyone can access space and use its technology to meet local goals. She focuses her work around the United Nations' Sustainable Development Goals, a set of 17 global priorities created by the U.N. Development Program. Sample goals include ending hunger, ensuring access to clean water and addressing climate change and its effects.

Traditional space technology does sometimes address these issues. For example, satellite data can inform agricultural practices, for example, and a whole fleet of satellites keep an eye on climate indicators. But they do so within the confines of the same satellite design and rocket technology that underpins all other uses of space. Wood believes in putting these values at the base of a project, so that they infuse every step of the way.

Consider how we power rockets in the first place — with huge quantities of toxic, flammable rocket fuel that scientists suspect is polluting Earth's upper atmosphere. Engineers regularly work to reduce the amount of fuel they need, but Wood pushes the question deeper. "Can we choose ingredients for spacecraft that are not so expensive or so difficult to operate?" she said. So her team is studying whether paraffin wax could replace rocket fuel, since it's cheaper and safer to handle.

Another area in which Wood is working is how satellites are created. "Our current approach mainly depends on doing a design for a satellite that's complete on Earth," Wood said. "We can imagine a future in which there are basically small factories available in space." Incorporating technology like 3-D printing and modular parts, assembly could move to space, changing the engineering problems and costs involved in building satellites.

Such an approach could also affect the challenges and costs at the other end of the production cycle. Right now, when satellites are no longer in use, most are carefully de-orbited to avoid cluttering space — but for decades, the first spacefaring nations didn't stop to worry about leaving junk in orbit. That gave them an advantage. "Early space actors could take sort of a lazy approach to satellite engineering," Wood said. As long as it reached space safely and did its job without breaking, it was a success. [Explorer 1: America's First Satellite in Pictures]

Newer satellite builders don't have that luxury, since space junk has become such a challenge — they need a cleaner endgame. And they have to work around debris already in place, designing trajectories and technologies that keep their creations safe from the litter of previous satellites, which can cause extremely damaging collisions. "They're also inheriting the physical realities of what's happening in orbit due to space debris," she said.

But rethink satellite production, Wood said, and space junk could be designed out of the system. Satellites that have served their purpose could be split into their modular parts or melted into 3D printer stock material, regenerating their successors.

And such overhauls could also close the gap between building satellites and getting them to space. Even as cheaper small satellites like cubesats have proliferated, more established spacefaring nations still control most launch opportunities, with the notable exception of a United Nations' program that has helped countries like Kenya and Mauritius build satellites launched from the International Space Station. If a satellite can be built in orbit, its creator doesn't need to rely on launch capability.

That would let more countries use space to pursue the goals that make sense for them on the ground — and make space a more just place, Wood said.