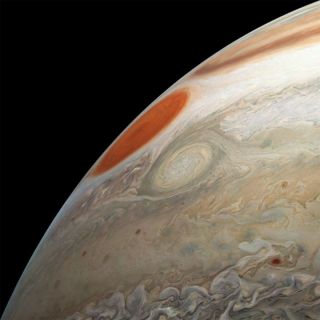 NASA's Juno spacecraft made another pass over Jupiter's surface late last month, and the data is back — including this stunning view of two enormous storms swirling across the gas giant.

The visible-light camera on board Juno, called JunoCam, has been able to watch Oval BA change over the course of the mission, with the storm becoming paler since a previous visit nearly a year ago, according to a statement from the Southwest Research Institute, which manages the mission.

The image consists of three separate photographs combined and digitally enhanced by volunteer imaging experts here on Earth. JunoCam captured the images when it was between 23,800 miles and 34,500 miles (38,300 and 55,500 kilometers) above Jupiter's clouds. The three photographs were taken during a 10-minute period on Dec. 21, during the spacecraft's 16th close science flyby of Jupiter.

Last month's flyby marks the halfway point of Juno's mission, which was carefully designed to cover the entire surface of the gas giant in 32 flybys. The spacecraft will remain at work until July 2021 to complete those orbits. Its next close approach will come on Feb. 12.