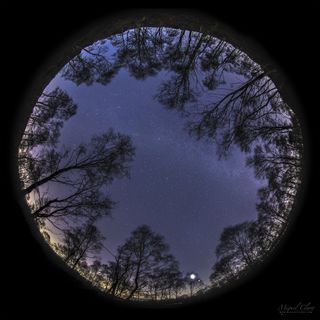 A fisheye scene shows 180 degrees of the sky above Peak District in the United Kingdom during a winter, moonlit night, with a subtle presence of the Milky Way twinkling among high trees.
(Image: © Miguel Claro)

Miguel Claro is a professional photographer, author and science communicator based in Lisbon, Portugal, who creates spectacular images of the night sky. As a European Southern Observatory photo ambassador, a member of The World At Night and the official astrophotographer of the Dark Sky Alqueva Reserve, he specializes in astronomical sky-scapes that connect Earth and the night sky. Join Miguel here as he takes us through his photograph "A Full-Dome View from Peak District."

A full-dome fisheye view shows 180 degrees of the night sky over the United Kingdom's Peak District on a crystal-clear winter night, when thermometers dropped to minus 8 degrees Celsius (18 degrees Fahrenheit).

With a subtle presence of the Milky Way crossing the center of the image, surrounded by high trees, the shy nature of our galaxy in this image came not from artificial light pollution, but because the moon is "polluting" the sky with natural light. Glowing against a starry night sky, it outshines objects around it. [How to Photograph the Milky Way in Light Pollution (Photos)]

Because of the moon's ability to obstruct our view of other things in the night sky, photographers need to choose the right night for a photo shoot. The fuller the moon is, the less you will be able to see in the sky. When I took this photo on Jan. 2, 2017, when the moon's face was 19 percent illuminated. (The moon appears full here because this is a long-exposure image.)

To capture the image, I used a Canon EOS 6D DSLR camera set to capture a 30-second exposure with the ISO set to 2000 and with an 8-millimeter “all sky” fish-eye lens, set to f/4.