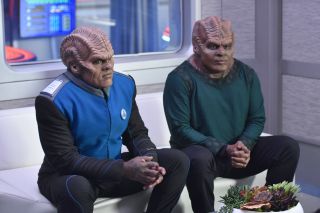 Sunday's "The Orville" episode "Ja'loja" was always going to be a tough act to follow. And, sadly, Thursday's episode, "Primal Urges," wasn't quite as well put together, and it fell just short of the opener's standard — not by much, but short nonetheless.

Bizarrely, Sunday's episode was originally intended to be this season's second episode, leaving Thursday's as the premiere. (In fact, even before that it was slated to be the final episode of last season.) Thank goodness none of that happened, as "Primal Urges" would have been a weak season opener. [Extraterrestrials Invade California: Alien Con in Photos]

"Primal Urges" finds the USS Orville in orbit around an expanding red supergiant star that's devouring the last remaining planet in its solar system. While the bridge crew looks on, fascinated by this stunning stellar phenomenon, Lt. Cmdr. Bortus (Peter Macon) asks to leave the bridge early, before his shift ends, as he's not feeling well. It's the third time this week he's done that, according to Capt. Ed Mercer (Seth MacFarlane).

As Bortus walks through the corridors of the USS Orville, Klyden (Chad L. Coleman) uses his communicator to call the lieutenant commander. Bortus lies to Klyden just as he'd lied to the captain moments ago, telling his mate that he has to work late. Something is clearly going on.

He surreptitiously enters the simulation suite, locks the door and loads the program "Bortus 486." A campfire appears in a woodland clearing. It's nighttime, and another Moclan emerges from the bushes dressed only in leather shorts. Is Bortus brushing up on his hand-to-hand combat? Is he preparing to fight to the death to satisfy his male, masochist Moclan urges?

The two embrace and start to make out … and the opening credits roll.

The viewer's first thought is that this episode may deal with something totally overlooked by "Star Trek: The Next Generation" and all the 24thh-century-set series of "Star Trek" — holodeck addiction. And don't tell us it wouldn't happen.

Imagine being able to do anything — quite literally anything — on one of those simulators. Walk on the moon with Neil Armstrong, have sex with anyone or anything, fight the Nazis on the beaches of Normandy with no danger of getting hurt, solve crimes like a pulp-novel detective, be a superhero, star on Broadway … the only limits would be your own imagination.

Forget the OASIS or trying to get into the Nexus — if you're unhappy with your life, just buy and build a holosuite and spend the rest of your life in there. It's like living in the Matrix, only even better.

"Star Trek: The Next Generation" made a couple of half-hearted references to this theme, almost always involving Lt. Reginald Barclay (played by the consistently undervalued Dwight Schultz), but the show never tackled anything serious in this area. Perhaps this is ground better suited to "Black Mirror."

"Is that where this episode of 'The Orville' is headed?" a viewer may wonder. How interesting. The answer is … well, sorta.

Turns out, Bortus has become addicted to pornography … which seems a pretty likely outcome if you had unlimited access to a hard light holographic-simulation suite.

The holosuite aboard the Orville always seems to be empty when Bortus sneaks in for a quick fix. Again, we're pretty sure that in reality it would be booked up by every available, off-duty member of the crew at all times.

Naturally, Bortus' lack of drive at home drives Klyden mad, and just before a nicely placed commercial break, we see Klyden plunge a large dagger through the chest of his sleeping mate.

The viewer's first thought is that this is some kind of dream, a subconscious warning Bortus is giving himself. But no, entertainingly and quite shockingly, we return from the commercial break to see Dr. Claire Finn (Penny Johnson Jerald) frantically trying to save the life of the Orville's second officer, which she does — just.

We learn that the Moclan method of beginning divorce proceedings is to murder your mate. This puts Mercer and his first officer (Adrianne Palicki) in a tricky position. The two ponder their options and enjoy two Xelayan blossom whiskeys that also come with a very pretty, but essentially pointless visual effect that probably cost $10,000.

In fact, the visual effects throughout "Primal Urges" are impressive; it's just a shame the writing isn't as tight as in last week's installment. Plus, every other cast member seems to get a back seat in this Bortus-focused episode, the second in a row.

The two Moclans must seek marital advice from the grounded Dr. Finn. Bortus does what anyone with an addiction would likely do at this point: He goes off in search of the good stuff. His hunt takes him to engineering, where he talks to a bizarre-looking alien who helps the lieutenant commander out. Bortus gets an isolinear chip of sorts full of data and makes his way immediately to the simulation suite.

In a token subplot, it turns out that the planet under observation, which is currently being simultaneously toasted and torn apart by superstrong solar forces, still houses a subterranean civilization. The crew formulates a plan to rescue them, but the dangerously high levels of radiation on the planet's surface can be tolerated by only two members of the ship's crew: Bortus and Isaac (Mark Jackson).

As the two make their way to the planet's disintegrating surface, an unseen software virus that was on the isolinear chip infects the Orville's computer systems. Isn't it always the way?

Lt. Cmdr. LaMarr (J. Lee) and Lt. Dann (Mike Henry) have the unenviable job of trying to fix this serious problem. There's more bad news: The planet's surface is now so unstable that the team can make only one trip in the shuttle, leaving many members of the stranded population behind.

The tragic death of these innocent people combined with the fact that the Orville barely escapes the gravity well of the red supergiant causes Bortus to reflect upon his recent behavior. He vows to never let this sort of thing happen again and to make more of an effort with his family.

Interestingly, Bortus still hasn't forgiven Klyden for forcing their daughter to become their son in "About a Girl" (S01, E03). It's nice to see such strong storylines from previous episodes remain strong storylines and not get forgotten about.

In the adventures of a starship crew, serious emotional trauma would remain a factor in day-to-day life for some time. You don't think Jean-Luc Picard fully recovered overnight from living an entire life in addition to his real one in "The Inner Light" ("Star Trek: The Next Generation" S05, E25) do you? Unlikely. These details that MacFarlane makes a point to include in "The Orville" make it compelling sci-fi — that and the fact that it can be side-splittingly funny at the same time.

We've seen how good "The Orville" can be, and it's always a bit of downer when an episode is below par. Pull your socks up, Seth.

You can buy the first season of "The Orville" on DVD, and you can get a digital season pass from Amazon.