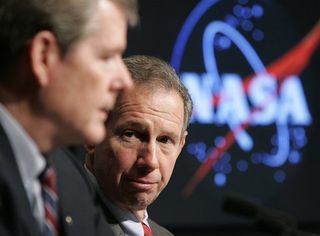 A NASA investigation into two reports that astronauts were drunk just before spaceflights has found no evidence that the alleged incidents ever occurred, the U.S. space agency announced Wednesday.

The wide-reaching survey of NASA records spanning the last two decades of shuttle flights yielded no substantiated accounts that astronauts ever flew aircraft of spacecraft while intoxicated, according to a 45-page report released today.

"Within the scope and the limitations of this review, I was not able to verify any case where an astronaut spaceflight crewmember was impaired on launch day" or where managers disregarded safety concerns from mission managers, said NASA safety chief Bryan O'Connor, who conducted the spaceflight safety review, in a briefing at the agency's Washington, D.C. headquarters.

The review results come after similar statements by NASA officials earlier this month citing no accounts of alcohol abuse by spaceflyers within the last decade of U.S. human spaceflight.

NASA launched the internal investigation in July after an independent health panel reported two anecdotal incidents of intoxicated astronauts who were later cleared to fly aircraft or spacecraft despite safety concerns by flight surgeons or fellow spaceflyers.

One account reportedly involved an astronaut who flew a NASA T-38 jet after a scrubbed shuttle launch attempt earlier in the day, while the other centered on an astronaut that launched toward the International Space Station (ISS) aboard a Soyuz spacecraft.

Both alleged incidents were reported without dates, astronaut names or specific missions, leaving NASA to sift through its own records to investigate the matter. Russia's Federal Space Agency has denied that any incapacitated astronauts have launched aboard its spacecraft.

"We felt that it was urgent to get on top of these allegations of alcohol abuse because they, in fact, posed a safety of flight issue if true," said NASA Administrator Michael Griffin during the briefing.

NASA first called for an independent study of its astronaut medical and behavioral health programs, as well as an internal review, after the Feb. 5 arrest of former U.S. astronaut Lisa Nowak in Orlando, Florida.

Police arrested Nowak at the Orlando International Airport on charges of attempted kidnapping, battery and burglary with assault after an alleged altercation with a romantic rival for the affections of a former space shuttle pilot. Nowak, who was later dismissed from NASA, has pleaded not guilty.

O'Connor did recommend that flight surgeons should expand their launch day observations of astronauts to ensure they are fit to fly. He also urged NASA to add "drinking to excess" to the agency's list of high risk activities which spaceflyers should avoid during the year before liftoff.

"I certainly feel badly that our astronauts' reputation has been besmirched by this," Griffin said, adding that the alcohol-related inquiry has overshadowed NASA's work to improve the behavioral health support for its astronaut corps. "But I can't avoid the knowledge that some news items are indeed sensational and we'll just all have to deal with that."

In his month-long spaceflight safety review, O'Connor sifted through records of 94 shuttle missions and 10 Soyuz launches from 1987 to the present and included interviews with flight surgeons and at least one crewmember from each of those flights. In all, he interviewed 90 astronauts, flight surgeons, mission managers and space workers, and found no alcohol-related complaints amid the agency's 40,134 mishap and close call records.

An analysis of the alleged shuttle-related incident, which was narrowed to flights between 1990 and 1995, turned up no evidence of alcohol abuse, O'Connor found. The Soyuz scenario, meanwhile, reportedly involved an astronaut so drunk that a worried flight surgeon stayed in the room overnight to ensure he didn't suffer an airway obstruction, according to the NASA report.

O'Connor did concede that medical privacy issues complicated his review of the Soyuz allegation, but he stressed that at no point did he uncover a flight safety issue related to alcohol use for during the Soyuz flights he surveyed.

Russian space agency officials traditionally hold a champagne toast before Soyuz launches, though the small amount of alcohol available during the ceremony has proven little concern to NASA flight surgeons and non-drinkers are not pressured to participate, O'Connor found.

Alcohol is freely available for astronauts during off-duty hours in the spaceflight crew quarters at NASA's Johnson Space Center in Houston, as well as the agency's Kennedy Space Center launch site in Cape Canaveral, Florida, where spaceflyers are sequestered before flight to avoid last-minute illnesses. But the high-profile and visibility of astronauts from wake-up to liftoff on launch day makes it unlikely that spaceflyer would jeopardize launch by becoming intoxicated, or be able to hide any such impairment from others, O'Connor wrote.

Last month, NASA officially adopted a no-drinking policy for astronauts within the 12-hour period before space shuttle and Soyuz launches. An unofficial policy, based on NASA's T-38 training aircraft flight guidelines, was already in place, but the new rules apply directly to human spaceflight, NASA officials have said.

"I think the controls we have in place for this sort of thing are very good and the probability of flying an impaired astronaut is very low," said O'Connor, himself a former shuttle astronaut. "In fact I couldn't even imagine it. I'd put it in the non-credible category."

While O'Connor did find instances of disagreements between mission operations and spaceflight medical teams, his review found no evidence that the safety concerns of flight surgeons or astronauts were disregarded as cited in the allegations, the NASA safety chief wrote.

NASA's current flight surgeon corps of 20 physicians overseeing astronauts also submitted a written statement confirming that its members' safety concerns have never been disregarded in the past, nor had they witnessed drunk astronauts during NASA shuttle, T-38 jet or Russian Soyuz flight preparations.

"Should such a situation present itself in the future, my review makes me confident that there are reasonable safeguards in place to prevent an impaired crewmember from ever boarding a spacecraft," O'Connor said.