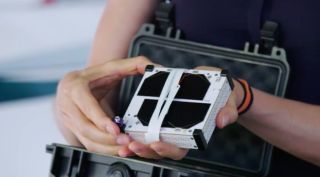 WASHINGTON — Swarm Technologies will pay $900,000 to settle an investigation by the U.S. Federal Communications Commission into the startup's launch of four picosatellites on an Indian rocket  this January without regulatory approval, the FCC announced Dec. 20.

Swarm defied the FCC by launching the satellites after the agency dismissed its application for an experimental authorization to communicate with the spacecraft. The FCC said Swarm's satellites, measuring one-fourth the size of a standard single-unit cubesat, were too small to be reliably tracked once in orbit.

The $900,000 penalty, though small compared to fines as high as $120 million the FCC imposed this year on spoofed robocall operations, is nonetheless meant to send a signal to those that might intentionally or inadvertently follow Swarm's footsteps.

"The size of the penalty imposed is probably not significant enough to deter future behavior," FCC Commissioner Michael O'Rielly said in a Dec. 20 statement. "[B]ut the negative press coverage is likely to prevent this company and others from attempting to do this again."

Swarm's renegade actions garnered condemnation across the satellite industry, which feared a regulatory clampdown in the aftermath of Swarm's decision. The FCC withdrew an authorization it previously granted for another four satellites Swarm intended to launch on a Rocket Lab Electron mission that occurred in April. Spaceflight, the company that arranged Swarm's January launch on a Polar Satellite Launch Vehicle from India, said it will now check to make sure its customers have necessary licenses ahead of time instead of relying on them to do their own self-regulation.

The FCC, in its investigation into Swarm, said it found the company had performed other activities that required FCC authorization. Swarm conducted communications tests with weather balloons and ground stations, along with other unapproved tests of satellite equipment ahead of the January launch.

Swarm also communicated with its "SpaceBee" satellites illegally for more than a week using earth stations in the state of Georgia.

"We will aggressively enforce the FCC's requirements that companies seek FCC authorization prior to deploying and operating communications satellites and earth stations," Rosemary Harold, chief of the FCC's Enforcement Bureau, said in a Dec. 20 statement. "These important obligations protect other operators against radio interference and collisions, making space a safer place to operate."

Swarm currently has seven SpaceBee satellites in orbit for space-based Internet of Things connectivity. The newest three launched Dec. 3 on a Falcon 9 rocket along with 61 other small satellites as part of a dedicated rideshare mission booked through Seattle-based Spaceflight.

Swarm CEO and cofounder Sara Spangelo, in a Dec. 11 blog post, thanked the FCC "for its smooth processing of this license."

The FCC said Swarm has followed FCC regulations since the investigation began in March.

Spangelo wrote that all seven SpaceBee satellites have been "consistently tracked" by the U.S. Air Force's Space Surveillance Network as well as by the company LeoLabs.

The FCC directed Swarm to designate a regulatory compliance director who will be responsible for implementing a compliance plan. Swarm, under the plan, must submit pre-launch notices to the FCC for 36 months that include who Swarm will launch with, on what rocket, where, and other details. The plan also requires Swarm to set up a compliance training program for employees whose work intersects with FCC communications laws.