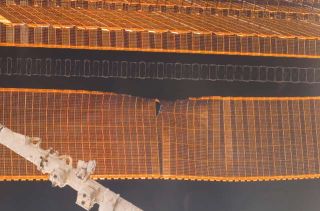 An view of damage to the International Space Station's 4B solar array, located on the Port 6 truss, that occurred on Oct. 30, 3007. A revised spacewalk isplanned to free the tangled solar wing and make repairs.
(Image: © NASA)

Space station and shuttle Discovery crew members,meanwhile, are biding their extra time today by improvising repair devices frommaterials around the laboratory for the spacewalk.

Although finer details are still in the works, mission managers saidyesterday that a unprecedented robotic arm setup will ferry veteran spacewalker ScottParazynski out to the damaged area.

"Thestation robotic arm ? doesn't provide enough reach to get the crew outward,"said Derek Hassmann, lead ISS flight director for the STS-120 mission, of the57-foot (17-meter) Canadarm2. To get that reach, he said the robotic arm willpick up the space shuttle Discovery's boom extension, on which Parazynski willride to the damaged area.

Astronauts remotelymoved the robotic arm to the center of the space station this morning inpreparation to grab the 50-foot (15-meter) boom extension for this weekend'sEVA. When Parazynski reaches the ripped 4B solar array wing, which is attachedto the Port6 truss segment, he will untangle a snagged guide wire and stitch inhomemade repair devices. Astronaut Doug Wheelock will accompany Parazynski on the spacewalk.

Mission managers said the operation will bedangerous, as significant electric power courses through the solar arrays, butnot any more so than general work in the vacuum of space.

"We'regoing 24 hours a day, non-stop, with three shifts of folks working,"Hassmann said of the effort to get the spacewalk plans in line. "When wego do it, it's not going to be any more risky than what we've done previous tothis. We're not going to do it until we're ready."

The tabbedends of the repair devices made from four-inch (10-centimeter) bars of aluminumwrapped in orange, electricity-proof Kapton tape, followed by thermally protective white tape. Steel cabling runs throughthe center of two aluminum bars to create a "cuff link," whichParazynski will button up the 2.5-foot (0.76-meter) rip in the solar array wing.

Mission managers said the fix should relievephysical stress yanking on the tear; once the repair is complete, allowing thearrays to fully deploy from their 80-percent-unfurled state. Should the repairfail, however, mission managers will use a fifth and final EVA to try again--shouldthat fail, astronauts might jettison the crippled array into space.

The spacewalk revision came after a previous change of plans, which had Parazynski and Wheelock inspecting a troublesome, grit-covered gears at the starboard end of the space station.

Mission controllers awoke the 10 sleeping astronautsaboard the orbital laboratory to the song "The Lion Sleeps Tonight" by The Tokensbefore the crew began their work in the figurative jungle of space. "Thatcertainly gets you going first thing in the morning," STS-120 commanderPamela Melroy said as she awoke.

Discoveryis scheduled to undock from the orbital laboratory some time on Nov. 5 and landNov. 7 after it careens across the central United States in daylight, butmission managers hinted yesterday that an extension may be imminent with a delayedspacewalk that has occurred.

The STS-120missionwas extended from 14 to 15 days earlier this week and has enough suppliesto remain at the space station for at least two more days.